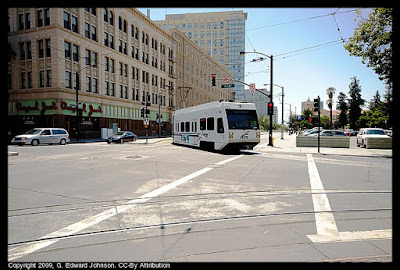 Now that the Purple Line is going to be light rail for sure (unless they change their mind) I thought I would look in to it a bit more. I decided to go to San Jose, CA and take a look at their light rail. In the city center it runs down the center of the road. While waiting for trains to come by I talked a bit to a security guard about it.

One of the big questions I had was about the distance between the Capital Crescent Trail and the tracks, is this really necessary? Clearly there isn't any distance or even fences in downtown San Jose. Finish The Trail likes putting up pictures of light rail with grass tracks that have little separation between the tracks and trails and a low or non-existent fence. The plans for the Bethesda-Chevy Chase portion of the Purple line call for more than 10 feet of separation and a fence and a height difference.

One thing I noticed about the San Jose light rail is that it is slow. You could easily keep up with it if you were on a bike, maybe a good runner could too. Apparently, this is for safety. It has to go slow enough it can stop for cars and people who are not where they are supposed to be. When it gets out of the city, it to goes in a fenced rail corridor and goes a lot faster. So that is the trade-off. Fences and separation lets you go faster. 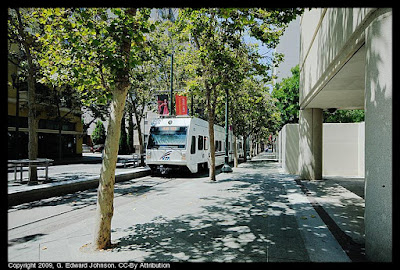 The trains generally have their own lane that is physically separated from the traffic lanes. People sometimes mistake these lanes for turn lanes and go in them. The stations are right along the road, either in the middle of the road or on the edge (like in the second picture)

Both pictures Copyright 2009 G. Edward Johnson. You are free to use them under the terms of the Creative Commons Attribution 3.0 license.
Posted by Edward at 2:18 PM