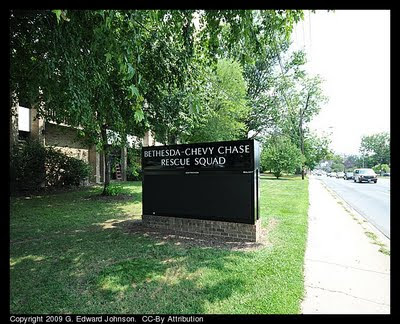 The slightly-old fashioned sign at the Bethesda-Chevy Chase Rescue Squad on Old Georgetown Road in Bethesda, MD has been replaced. The old one was one of those signs with the clip on black and red letters. The new one is a large red LED message sign like the one at Bethesda Fire Department on Democracy Blvd. The sign isn't active yet.

Update August 12: They were testing the sign this morning. There are Red, Green, and Blue lights so it looks like it will be colorful.

Update August 20: The sign has been running for a few days. It is nice and colorful but as I was driving it was hard to read the smaller words on it.
Posted by Edward at 9:33 AM