I wouldn't count on it being open for rush hour, but you never know. WSSC says that repairs to the 8500 block of River Road in Bethesda, MD are nearly finished. They replaced 80 feet of pipe and even after the road opens they will still be working in the area so they will have flagmen that may temporarily stop traffic.

River road has been closed for 9 days by this water main break. This is a pretty important commuter road so I am glad it happened around Christmas when many people are taking days off. I found a video of the reconstruction that was taken on Christmas Eve.

Tuesdays in December and January, the Lebanese Taverna Restaurant in Bethesda, MD is having Kid's lunch days on Tuesdays. There is a musical performance then lunch where kids eat free (one per adult purchase). Last Tuesday we went, but missed the performance. After we ate I was shocked to find out the kids eat free was only for the people who made it to the show. The manager was nice though and gave it to us free anyway. I'll be going again on Tuesday, but will make sure I get there on time.

The food is good. I got a Mediterranean Mezza Platter, which is a sampling of nine different things (I couldn't explain what most of them are). It looked a little sparse when I got it, but it turned out to be very filling. Especially since some of the foods are meant to be eaten with the delicious, fresh made bread they bring you.

The kids menu is different than most, more than just chicken strips and burgers (but they have those too) I liked the Chicken Schwarma Pita Pizza.

The shows are from 10:30am to 11:30am with lunch immediately afterwards.

Back in April I got the Philips Marathon Classic 65 Energy Saving Dimmapble Reflector Flood BR30, A compact flourescent bulb in a reflector floodlight package that can be used in recessed lights or track lights. I got it because it says that it is dimmable and I have a set of 7 recessed lights on a dimmer that I use all the time.

The bulb is rated at 8000 hours (thats 333 continuous days or about 5 and a half years at 4 hours a day) . It uses 16 watts and produces 630 lumens, roughly equivalant to a 65 watt incandesent bulb. It is more expensive than most CF bulbs at around $12, but that is the price you pay for the form factor and dimmableness.

Even though I needed seven, I only bought one because I wanted to see how well it worked first. It does, as advertised, work with a dimmer and dims correctly, however, there are a number of downsides. It doesn't dim as low as regular incandescents, if you dim it too far it just cuts out. It also takes 30 seconds or a minute to warm up. When you first turn it on, it will come one dim with a pinkish cast to the light. As it warms up, it brightens.

As you might guess, I wasn't thrilled with it, but the energy savings were considerable so I wanted to see if I would grow on me. I bought a second one a week or two later and installed it next to the first. Almost 9 months later, I can say that I got used to it, but never grew to like it. A couple of days ago, one of the bulbs stopped working, this is very dissapointing. It comes with limited warranty, most of the times these are useless since they require the receipt and proof of purchase, but, since I was uncertain about this bulb, I did save both so I am going to try returning it and see how that goes.

The verdict: Finicky dimming, takes a while to warm up, one of my two bulbs died really early. I'm not going to buy more and will probably wait a couple more years before trying them again to let the technology improve a bit.

An eight in water main broke Seven Locks Road, closing it. Since this road was being used as the River Road detour after yesterday's huge rupture, they had to detour the detour. Sevel Locks should be open by 7pm tonight, but they are running out of roads to have detours on. If a watermain breaks on Green Twig Road, Honeybee Lane, or Cindy Lane before 7pm, there could be trouble.

Posted by Edward at 3:36 PM No comments:

River Road seems to have turned into a river this morning. A huge water main broke, flooding the road with four feet of water and trapping more than a dozen people in their cars. They had to use boats and helicopters to rescue some of them. More info including pictures and video at channel 7. The break seems to be on River Rd between Bradley Blvd and Seven Locks Rd, just outside the beltway.

Parts of Bethesda (including my house) are currently experiencing low water pressure. I'd expect it to get worse before it gets better, prepare for a bit of time without water and the inevitable boil water advisory, keep an eye on the WSSC homepage. 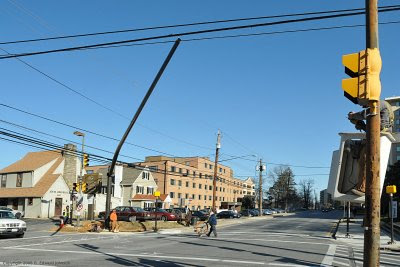 I just noticed that they are replacing the traffic lights at the corner of East-West highway and Pearl St. This is right as you are coming into downtown Bethesda, MD at the McDonalds. Instead of posts on all the corners, there is going to be one post and a boom going across the intersection. It is one long boom too, going diagonally across pretty much the whole intersection. The old poles were peeling and rusting so this is needed maintenance.

[where: Bethesda, MD]
[where: Montgomery County, MD]
Posted by Edward at 3:50 PM No comments: 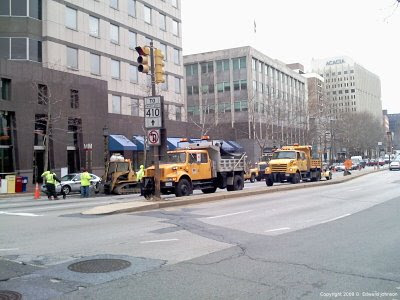 If you are going north on Old Georgetown Road, just where it makes a hard right turn by the Toys R Us to get to MD-355, you can see a small road straight ahead. I've long found it odd since it doesn't connect to Old Georgetown Rd or Executive Blvd, though I vaguely recall it used to. There also doesn't seem to be much of anything on the road. So, I've long wondered, why is it there?

Over the weekend, I ran across an image on wikimedia commons then things started to make sense. A long time ago (when I don't know) Old Georgetown Rd went straight there, connecting to Rockville Pike above Montrose Road. 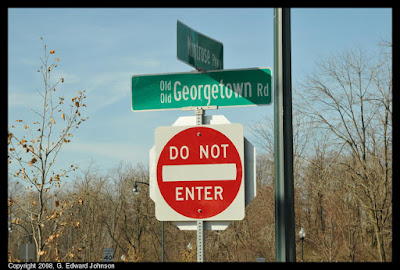 I was at the Toys R Us this weekend, in a futile attempt to find a Wii Fit so I decided to walk around back there and sure enough, the road is officially called "Old Old Georgetown Rd" Although the old signs (like at Montrose road) just give the old name, "Old Georgetown Rd".

Get rid of your old electronic junk

I know I have some stuff that I want to get rid of. I hope they re-use it where possible instead of just crunching it up.

I was walking through Bethesda Place Plaza over the metro station today and saw a duck head lying in a corner. I had to look at it a couple of times to be sure about what it was, and no, I didn't take a picture, nor do I plan to. But it did get me wondering about how it got there without it's body, I've never seen ducks in the plaza, and with the fountains off, there doesn't seem to be anything to attract them. I couldn't come up with a single plausible scenario about how it got there, but I did come up with several implausible ones.
Any ideas?

It seems that the Apple store on Bethesda Avenue will be closing. That sounds provocative doesn't it? It is really just moving, so the current store is, in fact, closing, but a new one is opening on the other side of Bethesda Ave. The new store is being built next to Rio Grande Cafe and will be a two-story affair. I read about it and decided to go by the construction this morning to take a look.

In case you are curious, the place they tore down was part of the strip of stores next to it. There used to be a blockbuster store there. Google Maps still has the old photo. 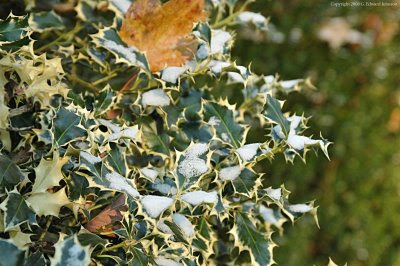