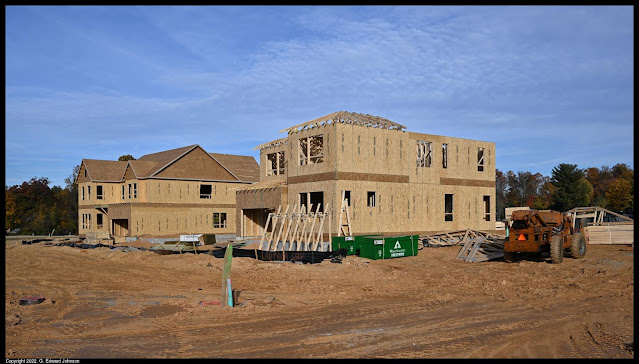 I have been tracking the Amalyn housing development in Bethesda since the very beginning. This development is in the 75 acre field that used to be the home of the WMAL radio transmitter towers.  Since my last update in May they have been preparing the site on the east side of the project, between Derbyshire Ln and Renita Ln.  Now they have started building houses in that area. The first two are in progress. 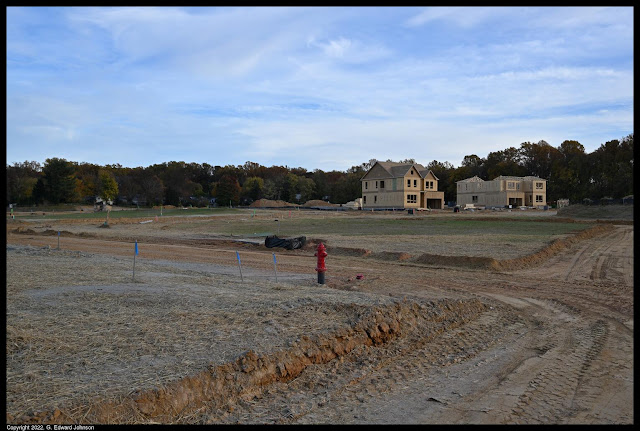 Here is another view of those two houses, notice how there isn't much around them.  You can see they have also started laying out the roads in this area. It may not look like much, but before they get to this point they have already put in all the water and sewer pipes. You can see a red fire hydrant in the middle of the picture.  The road going left to right is Silver Linden Street. (Derbyshire is directly behind the camera and Renita is way in the distance in the middle). 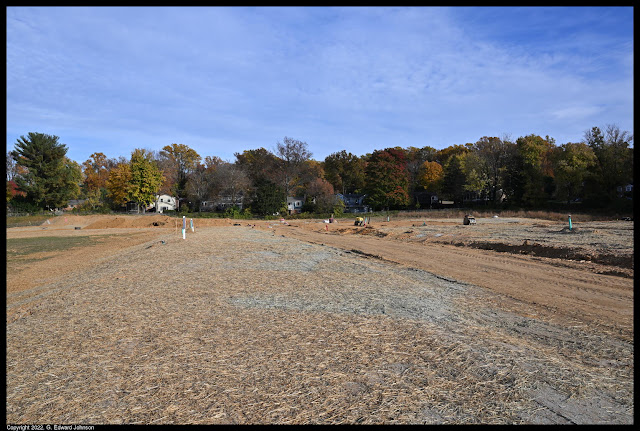 Here's another section of newly laid out road. They recently seeded the area directly in front of the camera.  Renita Lane is top right, the houses in the distance are on Corkran. I believe the road in this picture will be named Isabella Street. 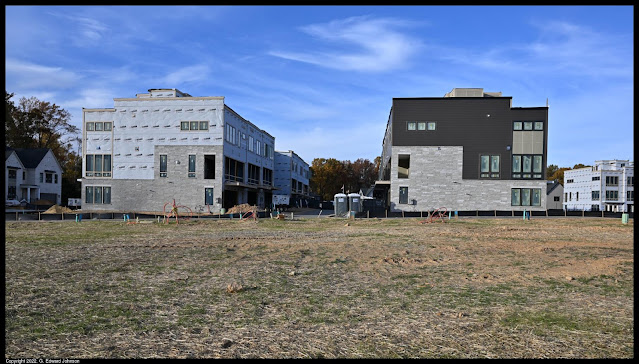 Back in the main section there is a lot to see. On the right, with the light and dark gray side is the first row of townhouses they built. To the left of that is the second row.  Far left is a house still under construction and far right is another row of townhouses being built. 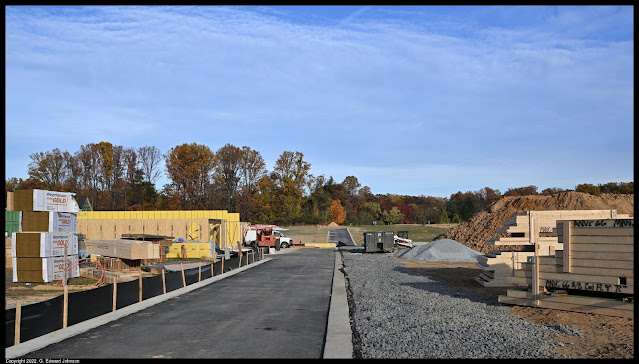 I think this is Glasswing Alley. Some of the roads have a layer of blacktop on them. They are in the process of building a house on the left. 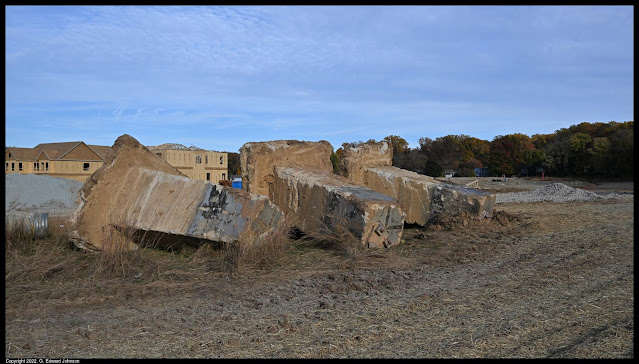 There are still bits and pieces left from the WMAL radio transmitter site. The three concrete piers that held one of the radio towers remain on their side. They have sat here unmoved all summer. 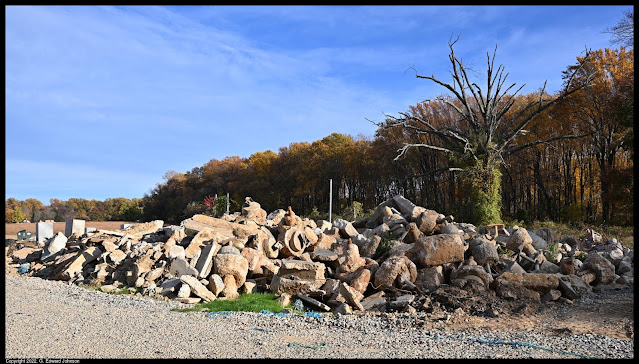 The various bits of concrete that have been dug up are piled in a pit. It is mostly concrete that fence posts were set in, but there are also some that the smaller transmitters were mounted on. 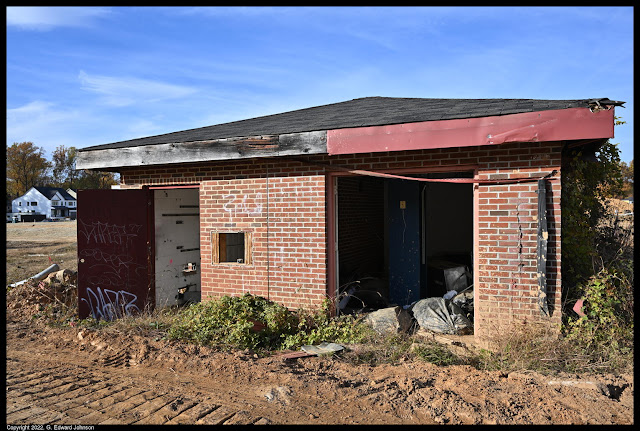 The last remaining radio transmitter building had open doors.  There used to be one of these at the base of each radio tower. 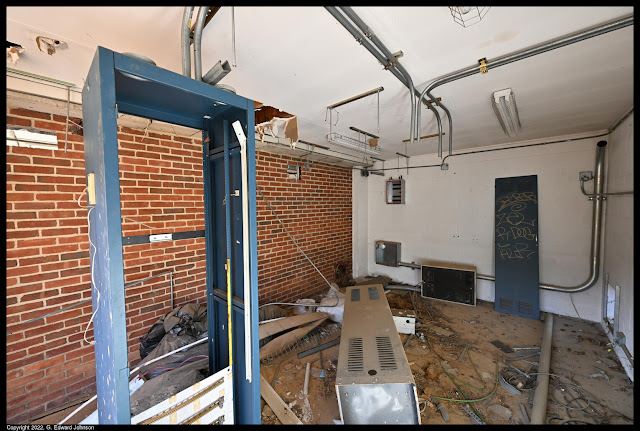 There isn't much to see here, a  few bags of trash and an old rack for rack-mount computers. It is a bit disappointing. 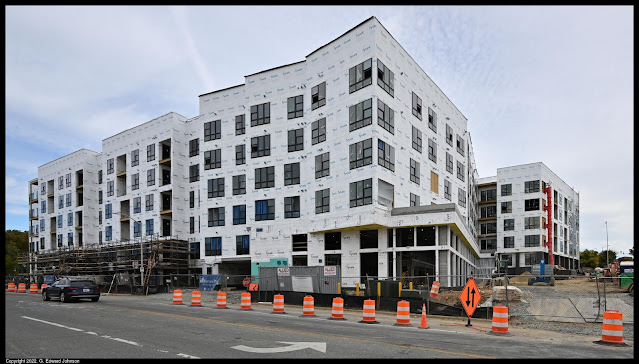 By Montgomery Mall and Home Depot, Folger-Pratt is building "The Rae", a 343 unit apartment building backing up to the I-270 spur.  This site was formerly occupied by Ourisman Ford.

They have put the final exterior coverings on parts of the building.  The I-270 spur is just beyond the trees in the right of the photo.

I have written about this project a few times:

Posted by Edward at 7:01 AM No comments:

Solaire Bethesda at 7607 Old Georgetown Road in Bethesda is going to be a 198 unit apartment building with a tiny 1,500 feet of retail space. I've been watching this for a while, but sometimes you just don't feel like posting about holes in the ground (other times you just can't get enough of it).

The first 3 (of an eventual 22) floors rise above Commerce Lane. This will be a narrow-but-tall building.

The back of Solaire Bethesda as seen from Bethesda Place Plaza. Only the top floor is visible.

I haven't posted about this project before, but I did post about La Madeleine back in 2010.

Posted by Edward at 7:41 AM No comments: 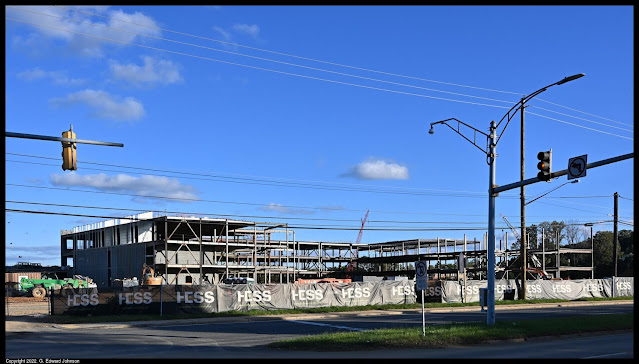 Woodward High School construction continues.  The steel frame of the building is up and a cinderblock core exists on the left side of it.  The plan is to have it ready for the 2022-2023 school year and move Northwood High School there for two years while that building gets rehabilitated.  After that it will re-open although the school boundaries haven't been determined yet. 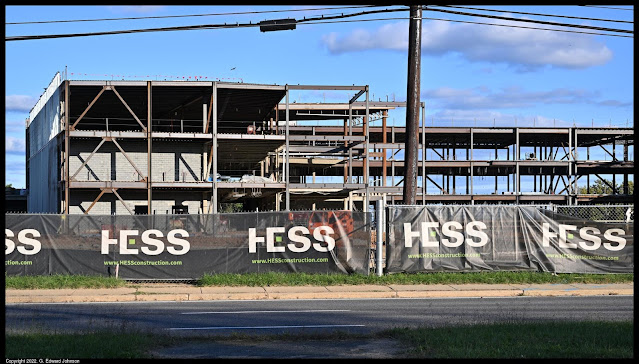 Charles W. Woodward High School was established in 1966 and closed in 1987, it's students were re-districted to Walter Johnson High School. The building was used by Springbrook High School while it was being renovated then by Tilden Middle School while their facilities were re-built. Demolition of the old building started in February of 2021 (see below for posts I did about the demolition). 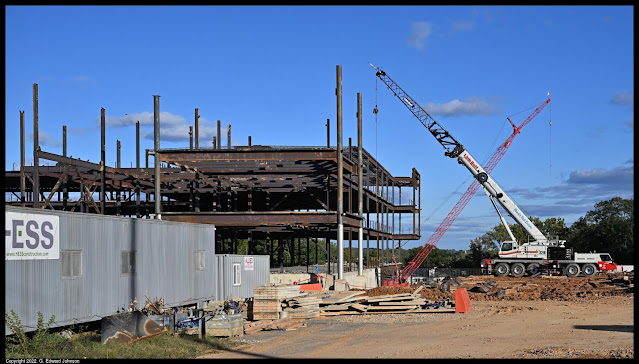 I actually took these pictures a week ago but was too busy to put them up. I don't think that much has changed in a week. 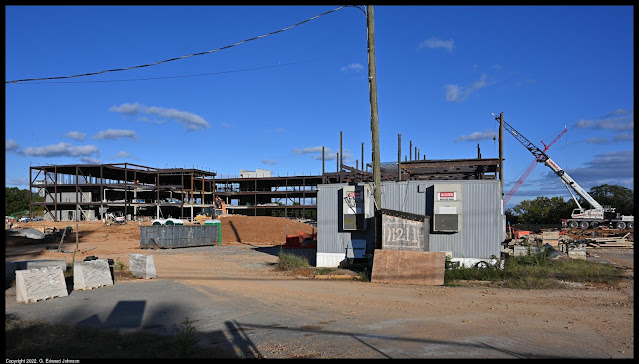 Updates about the demolition of the old building: 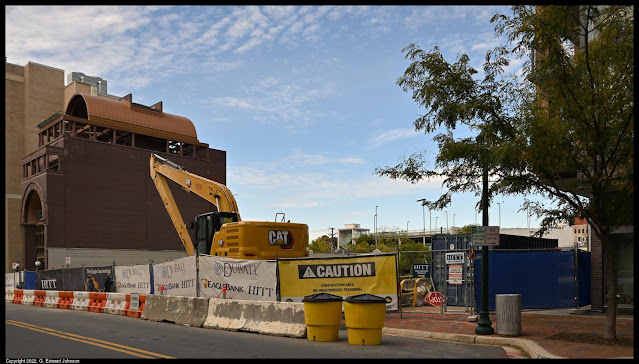 This is the future site of St. Elmo Apartments as seen from Fairmont Avenue, with Bistro Provence to the left of it.  Although it is Called St. Elmo, it fronts both St. Elmo Ave and Fairmont Ave. When finished it will be a 22-story mixed-use development with 276 apartments and 6,000 square feet of ground-floor retail. This building has a ways to go, but it is expected to be complete in the first quarter of 2024 so they still have time.

The excavation for St. Elmo Apartments.  Yes, it is another hole in the ground, I've been looking at a lot of these lately. Massive metal tubes, presumably to keep the sides from collapsing, cross the site diagonally. 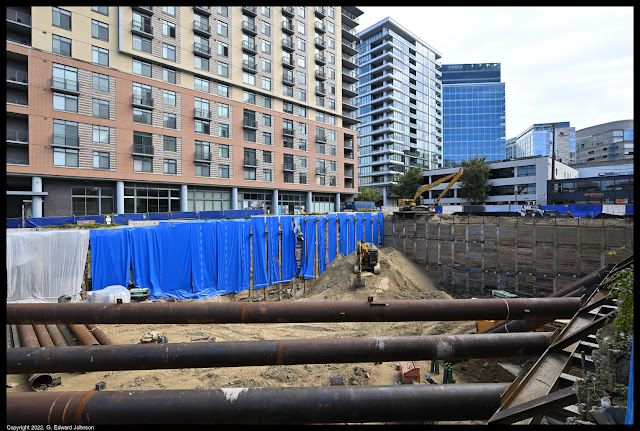 Another view of the excavation for St. Elmo Apartments. Bainbridge Bethesda is behind it on the left side of the photo.

Posted by Edward at 8:00 PM No comments: 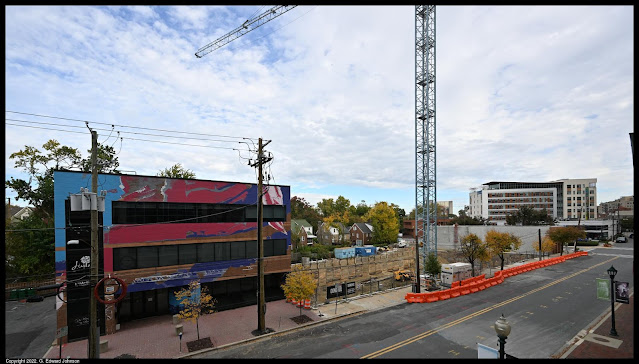 Another hole in the ground. This is the site of the 4915 Auburn Avenue development (link to pdf of site plan). it will have 180 dwelling units and 12,500 square feet of "non-residential use".  The site was previously occupied by the Auburn Professional Building. You can see an existing building to the left, a small retail building on the corner of Auburn and Woodmont to the right, and housing directly behind the site.  This is a project of Potomac Development Group, it looks like they are calling it 4909 Auburn Avenue Apartments.

Looking almost directly down, you can mostly see the hole which encompasses the full site except a narrow strip on the far edge of the property. Surrounding the crane is some new concrete.

The construction entrance for the 4915 Auburn Avenue development is actually on Woodmont Ave. You can see Imagination Stage and the parking garage behind the construction.

Auburn Avenue as seen from the top of the parking deck. the development directly below and to the left, Battery Lane Park is somewhat visible behind the crane with the building containing the Primrose School next to it. In the middle is the Sherwin-Williams Paints store with Brightview Woodmont directly behind it. On the right side is the parking garage and Gallery Bethesda towering above everything else.

Posted by Edward at 5:00 PM No comments:

Today has been a really nice fall day and I decided to walk around Bethesda, MD checking up on some of the construction projects that are going on.  Here's the first one I looked at, the 8015 Old Georgetown Rd development (pdf link to the planning board submission).  This is the site of the old Christ Lutheran Church, it is being replaced with about 297 apartments. 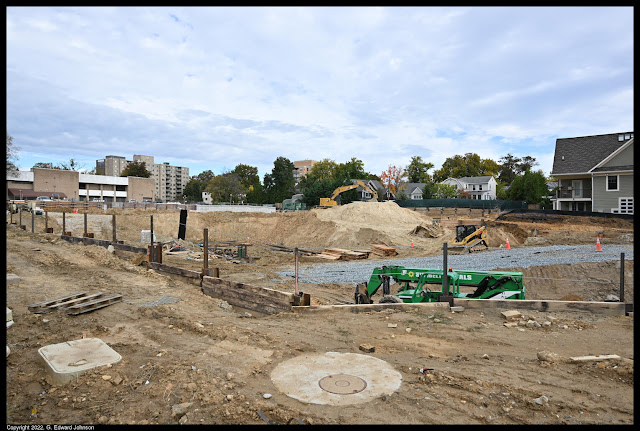 From this perspective it basically looks like a hole in the ground, you can't see what they have accomplished very well.

The North-west corner of the site.  From here you can see they have put in a retaining wall on the left side and are digging out the basement.

It isn't obvious at first, but they actually have done a lot of grading to the site.  In the center you can see about a 15 foot tall pile of dirt. That wasn't built up there, that is what remains of the original ground. They removed everything around it, leaving just a small pile holding up a utility pole.

Posted by Edward at 2:25 PM No comments:

The Washington Monument at Dawn

One of the great things about living in the D.C. area is you can go see the monuments any time you want.  All too often, however, we forget about them. This morning I decided to take advantage of my location and go see the Washington Monument at sunrise.

I got there early, which was a good thing since many of the roads were closed.  I didn't realize it at the time, but this morning was also the Army 10 miler.

You would think that going before sunrise there would be no one else around, but there were a few other people that had gotten there even earlier than me (it was also the day the full moon sets directly behind the Lincoln Memorial so I am sure there were some people there for that).  If you look closely you can see a couple of people leaning against the flag poles at the base of the monument.

The Lincoln Memorial was even more crowded with people watching the sunrise from the steps. Finally, the sun rose, making it's way among the buildings to the right of me (that is south-east if you are curious).