Odd and out of place 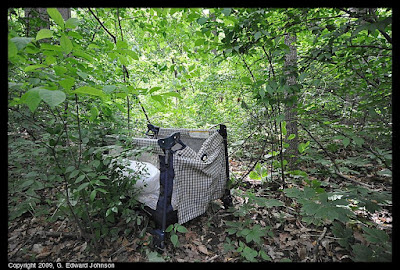 Every once in a while you see something that is so out of place that it defies explanation. I was walking along the Capital Crescent Trail near Little Falls Parkway and saw a side trail. I followed it a bit and came to this Pack and Play sitting there. Aside from a bit of water and mildew, it was in good condition so it isn't like someone just tossed a broken one out. If you aren't familiar with them, the are like the playpens of old but they fold up, the bent side in the one in the picture isn't broken, it is supposed to fold there. Another odd thing was that the trail was well defined but it didn't seem to go anywhere, it just petered out after a while. On an unrelated trail, Cycle Jerk, ran across A toaster and percolator from the 50's.