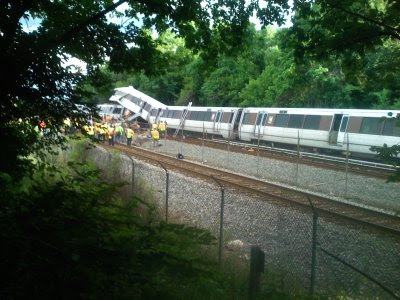 There is still a significant impact from yesterday's accident on metro's Red Line. The red line between Brookland-CUA and Silver Spring is still closed and will remain so for at least the morning rush hour but probably for the whole day. There will be no service at the Takoma or Ft. Totten stations. (The metro website says that Brookand will not have service, but a more recent message on twitter says that it will be open.) release There will be no MARC Brunswick line service today. Shuttle buses will operate between Silver Spring and Rhode Island Avenue stations, but that will not be able to handle a normal rush hour volume.

Your alternatives are fairly limited. They do have bus service but a bus holds about 50 people and a single metro car holds 100+ so it will be a slow trip. You may be able to find a regularly scheduled metro bus line that goes near you want to go, check out the metro link at the bottom of this post. Some roads near the accident are closed.

It appears that one train was stopped waiting for permission to pull into a station when another train ran into the back of it just after 5 pm yesterday. Computers are supposed to act as a fail-safe and prevent trains from getting too close to each other but that didn't work.

Seven people are confirmed dead and more than 70 people were transported to area hospitals. This is only the second crash in Metro's history where passengers were killed. The other one was January 13, 1982 when three people died, the same time as the Air Florida flight 90 disaster

Update 8:35 AM: The death toll was revised down from Nine to Seven.