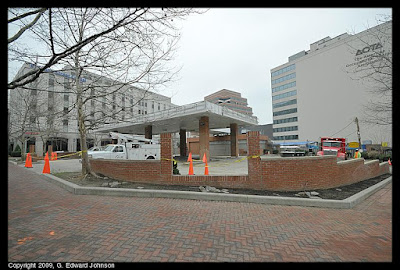 I noticed that the Exxon station on Wisconsin Avenue at Montgomery Lane in Bethesda, MD is closed and undergoing renovation. I saw them painting the canopy last Friday so it looks like they are just renovating/updating it, not tearing it down. I don't know if it will come back as an Exxon or if it will change brands.

Update March 30: I really did see them painting the canopy, which now seems odd since they totally removed it. It looks to me like they are putting a new one up though, so I'll stick with my original conclusion. (for now at least)

Update April 13: I have another post about the former Exxon gas station.
Posted by Edward at 12:18 PM