Is there something in the air? 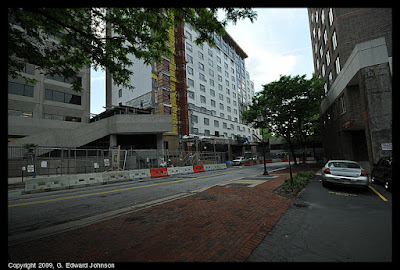 The Washington Post has an article about how the construction of the Hilton Hotel on Waverly St in downtown Bethesda, MD is causing problems. They have been sanding the side of the building and it is causing a blizzard of fine dust and plastic foam to swirl through the air. The problem, began in "late March, [and] continued as recently as yesterday, despite eight more visits from county environment officials, three citations totaling $1,500 in fines and a threat by the county to withdraw the building permit."

There is a daycare right next to this building (Childtime), I wonder how those parents feel about this.

Update 3:20pm: I walked by there and even though they weren't working today there were a lot of small bits of Styrofoam swirling around on the ground. Nothing you would inhale, but anything smaller would have blown away by now.
Posted by Edward at 10:06 AM