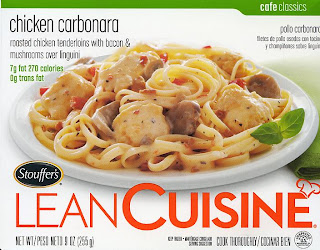 One of Stouffer's Lean Cuisine Cafe Classics. Roasted chicken tenderloins with bacon and mushrooms over linguini. The sauce was creamy and there was plenty of it. I was a bit suprised at how much I could taste the bacon in it. The noodles came out fine, not mushy or stuck together. The tray has the sauce, chicken, and mushrooms on one side and the noodles on the other, you get to mix them together. The chicken was a disappointment it was tastless and mushy, not a good texture. I also would have like another piece of it. There also weren't enough mushrooms, I think there were only four slices. Overall, my feelings were mixed, good sauce and noodles, bad chicken. (270 calories; 7g fat; 33g carbs; 19g protein; 26% sodium; 6 weight watchers points)
Posted by Edward at 12:53 PM