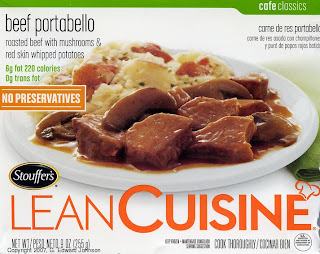 One of Stouffer's Lean Cuisine Cafe Classics: Roasted beef with mushrooms and red skin whipped potatoes. This frozen dinner has a winner of a sauce. A good flavor that goes well with the beef and mushrooms. The beef is decent, it is tender but it doesn't have much flavor on its own, that's ok because it gets the sauce's flavor. The mushrooms were less impressive, not quite rubbery, but not quite the right texture for a portabello mushroom either. The potatoes were good, although a bit dry, mixing sauce in with them makes them much better. I also have problems with them being called whipped, more like smashed, there were large chunks of potato in them. I liked how they were done, but they're not whipped. It weighs in at only 220 calories, I would like it to have a few more. Overall, this is a good bit of frozen food. (220 calories; 6g fat; 25g carbs; 16g protein; 28% sodium; 5 weight watchers points)
Posted by Edward at 5:21 PM