Another Gas Leak in Bethesda, MD 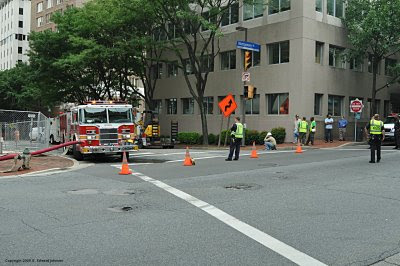 For the second time there has been a gas leak at the new Hilton Garden Inn hotel under construction on Waverly St in Bethesda, MD. It shut down Montgomery Avenue which is MD-410 eastbound, a fairly major commuter route from Bethesda to Silver Spring. This is the first time I have ever seen a Washington Gas truck blow through a traffic light and make a high-speed (for a truck with a trailer) left turn.

There was also a gas leak at this same location the morning of April 11th, 2008. This is also the construction project that was causing a blizzard of foam insulation to float around in May.

As of 3:15pm both Montgomery Ave and Waverly St are closed to traffic.

At 3:25pm Montgomery Avenue had re-opened to traffic.
Posted by Edward at 3:10 PM