The difference a year makes

I have this little project going where I take pictures to track how Bethesda changes. I haven't been doing it for long so mostly it is of construction sites since they change faster. I now have a couple of pictures that were taken exactly one year apart, it is interesting to see what changes you can find. I've made a list, but perhaps I missed some. Most of these changes are pretty subtle, after all, its only been a year. I tried to take the picture from roughly the same spot, but I used a different lens so I didn't attempt to make the picture exactly the same. 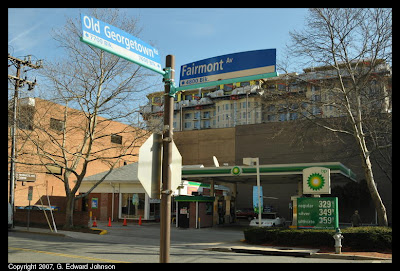 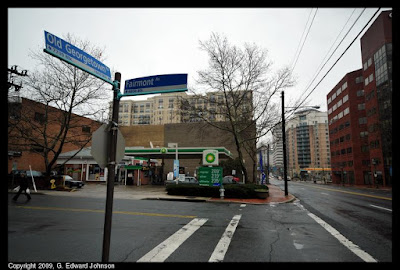 The most obvious change is the difference in the weather, but that doesn't really count. Lionsgate condo's in the background have been finished and now have people living in them. Gas prices have gone down by $1.20. Bethesda in general has high gas prices and this year this gas station is higher than the ones around it (Last year the Shell down the street was usually higher). Below the prices, the sign used to say "Amoco Fuels", now it says something diferent (vpower? I can't quite read it). It also looks like they have the authorized inspection station" sign to the left of the gas price sign. The banners hanging up are a bit different, but that is pretty much a given. I had to pull up the full sized pictures to see this, but on the left side both grounding wires running from the utility pole used to have a cover, now on the inside one, the yellow cover is missing. There are also some things that stand out as being the same. The Old Georgetown Road sign is still a bit bent.