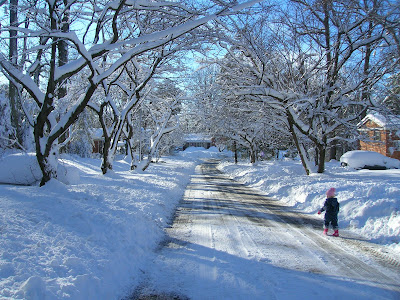 Another day, another major snowstorm. This one was even bigger than the last, about 2.5 feet here in Bethesda, MD. In my mind, this tops the snow of 1979, in part because the quantity is similar and in part because I lost power for 35 hours.

At 5:15am on Saturday morning I was working on the computer and I see a bright flash of light out the windows. With that, the power goes out. There were two more flashes in the next minute or so. The snow kept coming and the power stayed out all day.

Late on Saturday, when the snow stopped I pulled out the generator and wired it into the furnace so we had a little bit of heat. I didn't run it overnight so it was 50 degrees when we woke up. I also had a tree fall across my driveway and I only have an electric chainsaw. Again, the generator came in handy and I cleared it Sunday morning. We finally got plowed and power back on around 4pm Sunday. Some people in the neighborhood have gas fireplace inserts and although they didn't really keep the house warm, they did keep it from getting too cold. People totally without heat woke up Sunday morning to indoor temperatures in the low 40s and it kept cooling down throughout the day. 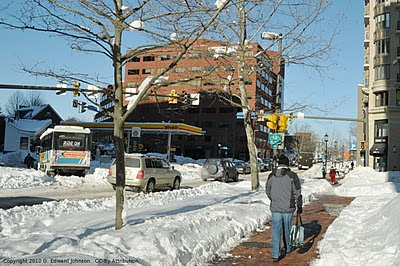 Monday Morning around 9am Woodmont Avenue and Old Georgetown Road: I took a walk to Caribou Coffee but it wasn't opening until 9:30. The bus on the left was stuck and had been for a while. You can see a brown UPS truck in the distance trying to make a left turn. It took him a couple minutes and lots of wheel spinning to make it.

Streets in Bethesda, MD are a mixed bag. Most of Old Georgetown Road was good except between MD-355 and Arlington Road. That is the snow-covered mess you see here. Wisconsin Ave has snow and slush on it but is drivable. Some sidewalks are cleared but many are not. 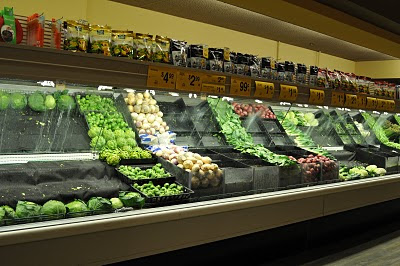 I also went to the Safeway to see what they had. It was surprisingly well stocked. Brand selection was limited for some popular items but they didn't seem to be out of much. There was plenty of milk, bread, and meat (but not much chicken). They were busy re-stocking shelves while I was there.

Here's a story that Channel 9 did on one Bethesda neighborhood. They were plowed and had the power back on a few hours later, I don't think it was a coincidence.
Posted by Edward at 10:01 AM