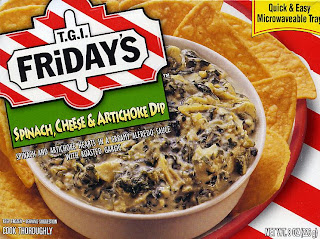 Not T.G.I. Fridays the restaurant, but the frozen food you buy in the store. This dip has spinach and artichoke hearts in a creamy alfredo sauce with roasted garlic. It is easy to cook, only taking 3 or four minutes. The spinach tasted like frozen spinach, nothing great there. There was lots of small artichoke pieces, it would have been nice if they were larger. The sauce they were in was a bit thin. Matter of fact, I'm not used to spinach artichoke dip having a sauce, usually it is thick, and creamy, but not really liquid at all. That is probably why I was disappointed in this appetizer and wouldn't get it again. (45 calories 3.5g fat; 2g carbs; 2g protein; 5% sodium; per 2 tablespoon serving)
Posted by Edward at 8:59 PM