Over the weekend I went to Pennyfield Lock on the C & 0 Canal.  This is a popular place to access the canal, there were about 30 cars in the lot when I was there. At the lock there is a small boat ramp that you can use to access the Potomac River. (You actually go underneath the canal!)  There is also a field and the lock house, and, of course, lock 22.


Currently the canal doesn't have water in it here, but it is still a nice place.  The trees are just beginning to turn green and there are lots of low-growing flowers along the towpath.  Right below the lock I saw some small fish, big tadpoles, and several snakes.  Above the lock the frogs were really loud.  I could see them on the far side of the canal.  There were people jogging and biking a along the towpath. 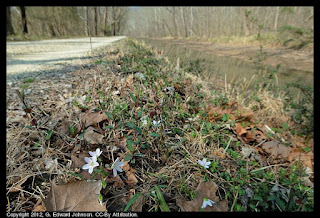 Just north of the lock is the Dierssen Wildlife Management Area.  It is a wetlands area between the canal and the river that has several shallow ponds.  I saw lots of turtles sitting on logs there.  It is supposed to be a good place to go birdwatching.  I saw a few ducks and heard a woodpecker in that area but I didn't look too hard.


There is some neat history here.  President Grover Cleveland used to come up here and fish while he was president.  He would stay in the Pennyfield House, a white frame house that was on this site until 2009 when it was demolished.  I was here in 2004 and took a few pictures of it, it was in very bad shape then.


If you want, you can rent lockhouse 22 and spend the night right on the canal!  There is no electricity or running water, the nearest faucet is at swains lock, over a mile down the canal.  But there are port-a-potties and you can have a campfire, it sounds like it could be fun.