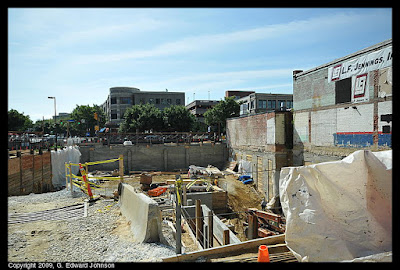 It has been almost five months since I last posted an update, a lot has happened since then. Five months ago they had cleared the lot, it was totally bare. Now, they have dug down and created a large basement. They have put in most of the concrete walls to hold the dirt out, the exception being along the ramp down into excavation. I suspect the ramp is temporary and will be removed once they no longer need heavy equipment at the bottom of the pit.

If you missed the earlier posts, this construction is along Woodmont Avenue in Bethesda, MD. It also borders Hampden Lane and Elm Street. Equinox Fitness will be moving in here with a four story 31,000 square foot fitness facility that includes amenities such as a full service spa, a pool, cafe/juice bar and five group exercise studios.

You can see the full coverage about this construction project. 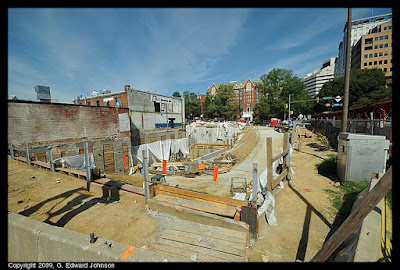