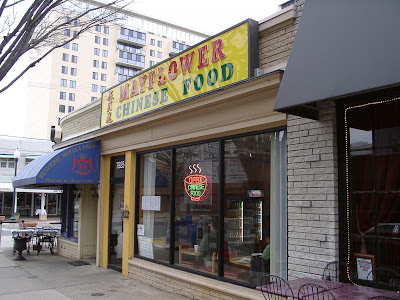 I have been avoiding chinese takeout restaurants for the past couple of years, the concept of vats of food simmering for hours (or days?) until you order it doesn't seem like a recipe for good food. However, I have been getting chineese food urges for a week and yesterday decided to give in.

I went to Mayflower Chinese Restaurant and Carryout, 7925 Norfolk Ave, Bethesda, MD (Near Cordell Ave). First, no warming dishes of pre-made food. Second, I could look into the kitchen area and the first thing I noticed was fresh vegetables (brocoli and celery if you're interested) Somewhat relieved, I ordered the Szechuan Beef from the lunch menu, it came to around 6 dollars. While it was being made I idly looked around the very small restaurant, very basic with half a dozen tables and a couple of coolers of soda. less than 5 minutes later I took it and walked half a block to Veteran's Park to eat.

Now for the food. It was decent, not as good as what you get from a decent chinese resturant, but better than I expected. The vegetables had been cooked fresh and the bell peppers and onions still had a crunch to them. There was also plenty of food, it rates high on the value for the money scale. It is hard to get decent food cooked fresh in only a few minutes, but I'll probably head back there another nice day to try something else.
Posted by Edward at 10:51 AM