Inauguration Part 2: being there

Also see Inauguration Part 1: getting there

I got to the National Mall around 9am, hours before the inauguration so I had plenty of time to wander around and see what was going on. I walked through the World War II memorial, by some Girl Scout volunteers (and their police escort), by the rows of port-a-potties and down to the Lincoln Memorial. 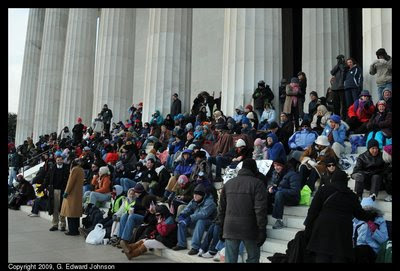 The stage was still set up from Sunday's concert, but they weren't letting people on it. The memorial was crowded but not packed. There was an path up the steps on each side and people sitting on the steps in the middle. Inside the memorial Lincoln was on the lookout, watching over the whole Mall. From the top steps of the Lincoln Memorial you had a good view of the Washington Monument and the Capitol dome, a mile and a half away. This area wasn't hugely crowded yet, but before the swearing in, the space between the WWII memorial and the Washington Monument completely filled up. I could see the frozen reflecting pool and two of the jumbotrons.

I headed back to the mall, going by 18th street again. It was still wall to wall people trying to get to the inaugeration, an hour after I had come down it.

I tried to get onto the Mall between the Washington Monument and the Capitol, but they had closed all access because it was full. Just as well, I don't think it would have been as enjoyable if I weren't able to move around a bit. 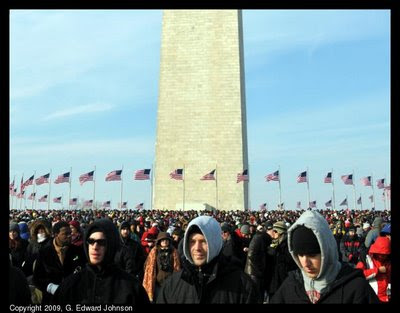 I went back to the WW II memorial and got a good seat. Yes, I got to sit down. I sat on the edge of the fountain, which was turned off and drained. Great view of the Washington Monument and a great view of two jumbotrons. No view of the capitol and you couldn't see most of the crowds. I had an hour to go so I lay down for a while and listened to the festivities. 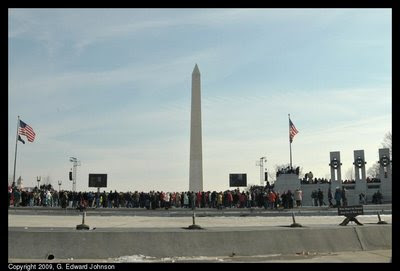 You can read about the swearing in and the speech about a billion other places so I will spare you the details. The only thing I have to add is that when Sen. Dianne Feinstein gave some remarks the sound and video were out of sync by a good 5 seconds. It was odd. Other those 5 or 10 minutes, the sound and video were synced up. Barack Obama's speech was very good, but you probably know that already.

After a weak poem, I headed up the street. Hugely crowded, and everyone had to stop a couple of times while they let dozens of empty buses go by. I made my way to Shelley's Backroom at 13th and F St and got a table without any wait. It was nice to relax and have lunch (it was after 1pm by the time we got to Shelley's).

I naturally took a bunch of pictures which you can see on my 2009 Presidential Inauguration Photos page.

[where: 2009 Presidential Inauguration, National Mall, Washington, DC]
Posted by Edward at 11:40 AM