Inauguration Part 1: Getting there 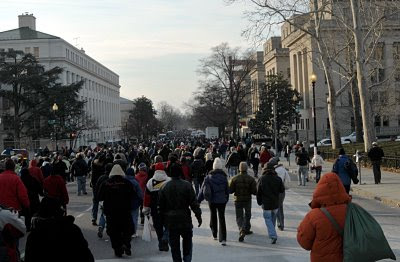 I went down to Barack Obama's inauguration. I figured if people were coming in from all over the country to see it, I could make a 10 mile trip. I got to Bethesda Metro Station around 8am and got the first train that came. I was on the last car and it was crowded. The next couple of stations we picked up a few more people until we were really packed in.

While on the train I talked to a group of three people who had driven in from Detroit. One of them (Tommy) was a database administrator for a non-profit there. I got off at Faraguet North and walked to the National Mall with them before saying goodbye and heading off on my own.

The walk to the mall was interesting in and of itself. the closer we got, the more people were walking and it was a sea of people from curb to curb, totally filling the street as far as you could see in either direction, all of us heading down to the mall.

Also see Inauguration Part 2: being there