The snow is coming down hard in Bethesda 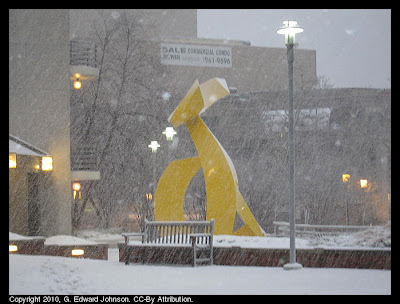 After a day of rain (and jokes about schools closing on account of light drizzle) the snow finally arrived. Wet snow coming down at a rapid rate, just like the weather people promised. Traffic, which was moving steadily at 4pm was barely crawling by 5pm It took me 45 minutes to go about 3 miles leaving downtown Bethesda, MD. The plows that I had seen earlier in the day were strangely absent. I'm not sure if they were on higher priority roads or just stuck in traffic like the rest of us. 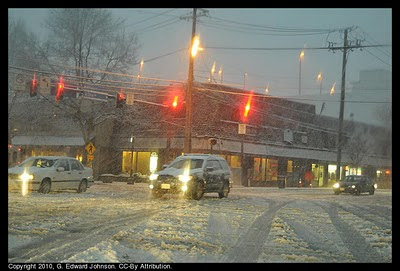 There has also been some thunder and lightning, the first flash I saw I thought was a transformer blowing up, but the streetlights remained on. Hopefully the power will remain on, this heavy, wet snow is perfect for bringing down trees so we will get to see if all the tree trimming Pepco has been doing has the desired effect. (Minutes after posting this I saw reports on twitter of people in Bethesda loosing power.)

We should get around 5 inches and most of it will be done by midnight. Hopefully the road crews will have enough time to clear out the roads for the morning but I wouldn't be surprised to see Montgomery county schools closed for a second day.
Posted by Edward at 6:03 PM