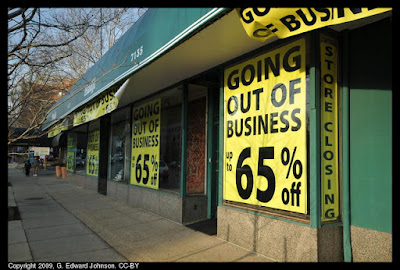 The poor economy is starting to take its toll on Bethesda. I previously mentioned the Pier 1 Imports closing, but that is not the only casualty. There are also a couple of other stores closing including Maurice Villency which has a really hard to read sign so probably was filled with high-end something or others and Hadji rugs. These rug stores are constantly going out of business, usually they are replaced by another rug store with pretty much the same stock, so it is hard to say if this one is economy related or just the normal course of business. I also noticed in the same area as Pier 1 there are a bunch of kitchen and bath and related design stores. I'd expect these to be hard hit by the recession, don't be surprised if they start closing soon. 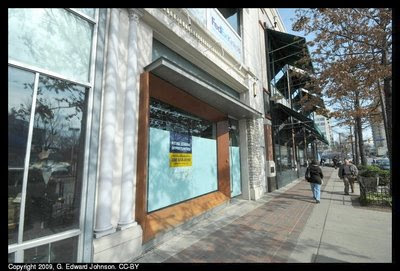 I went down Bethesda Avenue to see how it was doing. I found a bunch of stores missing. Artsy Fartsy (4836 Bethesda Ave.) is gone but there is still furniture in the store. Bowhe and PEaRe is closed with no replacement (4803 Bethesda Ave). Also gone are Marvolous Market, and Cameron's Seafood Market.

Life isn't all bad news so stay tuned for the good news edition.