Did you know that buses sometimes stop? 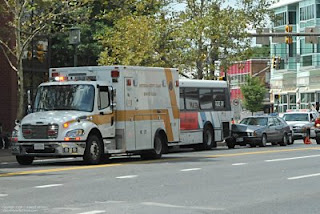 Of course, I don't know anything about this, but I'd speculate that the driver of the car cut into the bus's lane, not realizing the bus was stopping.

I was out for a walk on Old Georgetown Road in Bethesda and saw this accident involving a bus and a car. There were a couple of (assumidly) Ride-On related vehicles, the bus, the car, three police cars and an ambulance. After a while, a flatbed towtruck and another ambulance came by. The second ambulance didn't stay long so I don't think anyone was seriously hurt.
Posted by Edward at 2:09 PM