Clearing trees for the road at Amalyn Bethesda 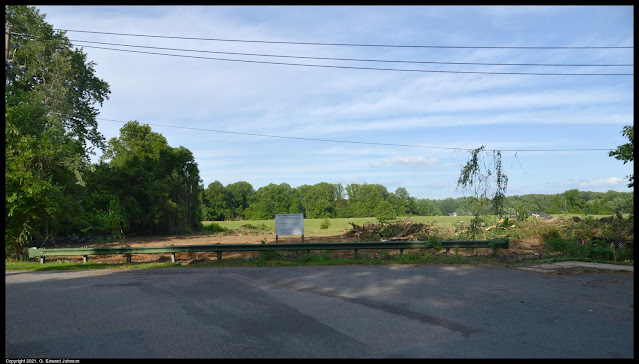 One of the first things that is being done for the Amalyn Bethesda housing development is to connect Greentree Rd and Greyswood Rd. They have started clearing trees at the end of Greentree Rd to allow for this work to start.

Here is how Greentree road looks now. All the trees and brush has been removed. 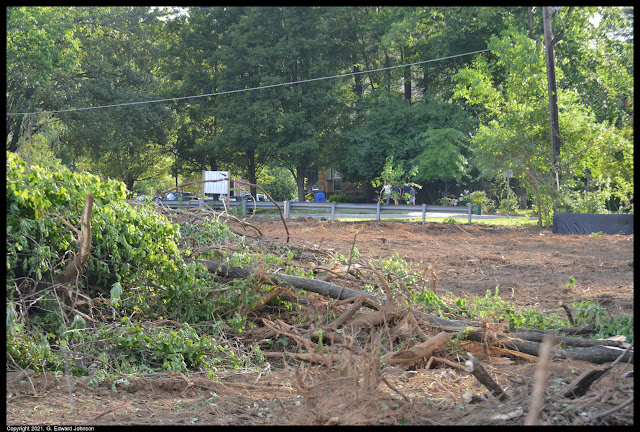 This is from the field, looking at the dead-end of Greentree Road. Prior to this, the trees and brush were dense enough that you couldn't see Greentree from here. 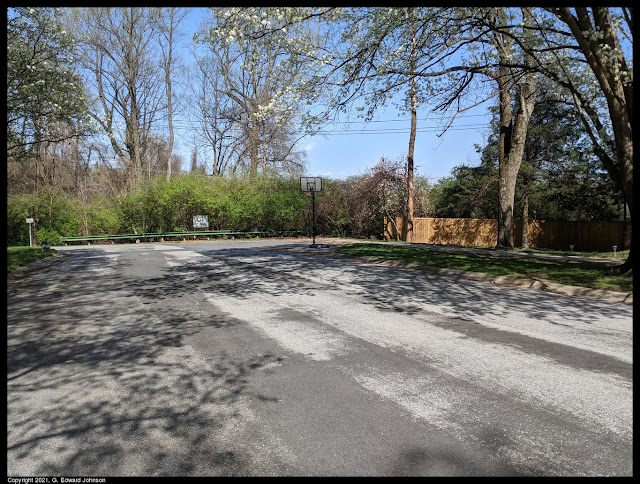 For comparison, here is how the end of Greentree Road looked earllier this spring.
Posted by Edward at 6:44 AM No comments: 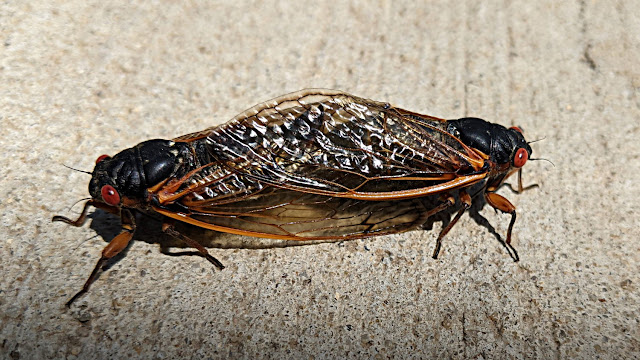 "In the Spring a young man's fancy lightly turns to thoughts of love." (Alfred, Lord Tennyson)

Now that the cicada's have been out a little while, and the racket they make has grown increasingly loud, it should come as no surprise that the singing is starting to pay off, at least for this lucky fellow and equally lucky lass.  They are especially lucky that no one stepped on them while they lay in ecstasy on the sidewalk.

After spending today listening to the cicadas, I was a bit surprised tonight to not hear them.

Posted by Edward at 9:27 PM No comments: 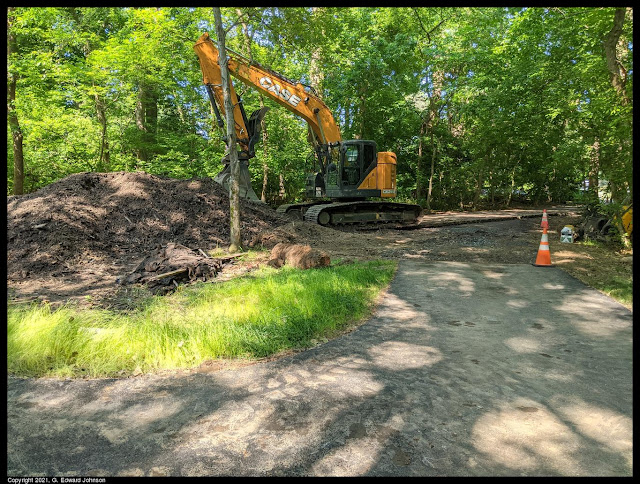 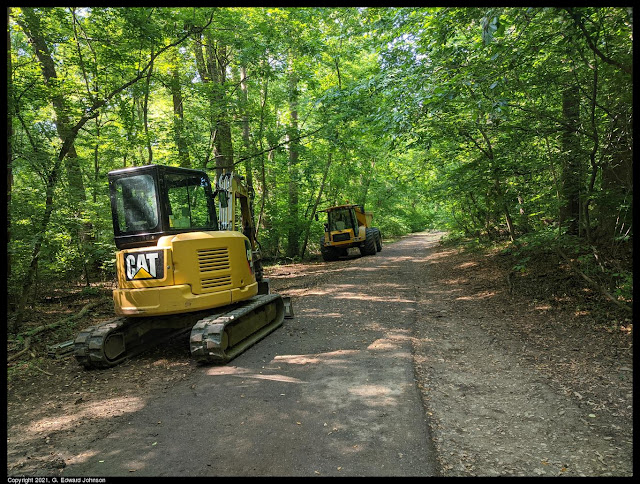 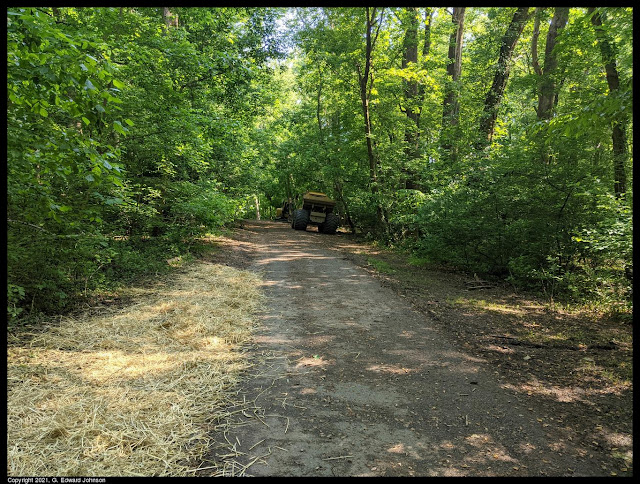 A couple of Cicada videos

Here are a couple of videos I have taken of the cicada attack.

This first video is a time-lapse of a Brood X cicada molting on a blade of grass.  This time-lapse was taken over a period of about 2.5 hours one night. One picture every 15 seconds.  Where a cicada walks over the emerging one and where the emerging cicada flips so it is holding onto its shell I have duplicated each photo 4 times to slow it down and make it easier to see what is happening.

This next video isn't a time lapse, it is just a view of about 20 cicada nymphs crawling aimlessly through the grass.  I was taking a timelapse of a molting cicada at night so had a couple of lights turned on, it appears the nymphs are attracted to light.

Posted by Edward at 8:39 PM No comments: 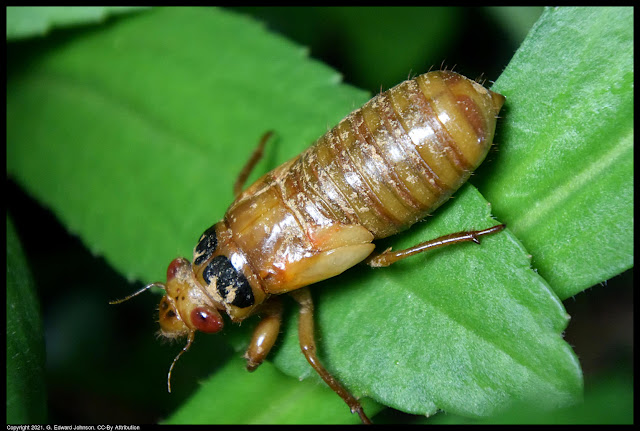 The cicadas are out in force and for the past week or so I've been watching them and taking pictures.  Here are a few of my favorites. 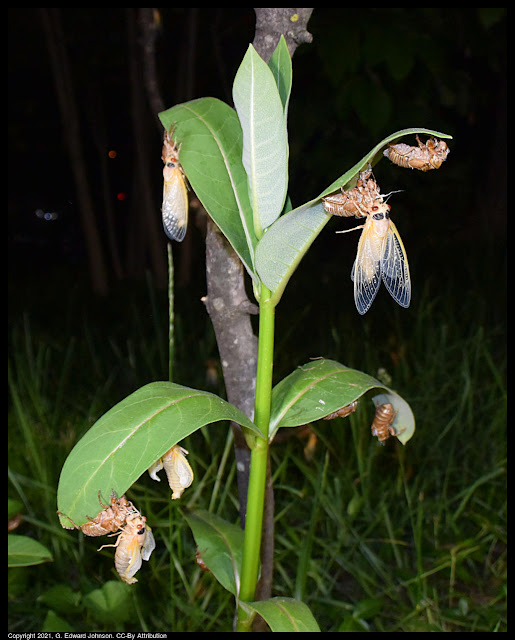 These Brood X cicadas have been underground for 17 years, but now they are climbing out and onto trees and plants. Once out, they do a final molt to their winged form.  They will only live for about a month longer during which time they will mate and lay eggs. 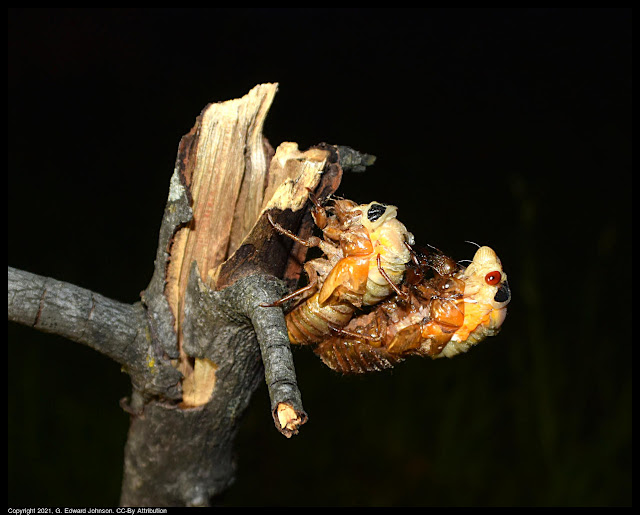 Posted by Edward at 9:19 AM No comments:

I took this timelapse video of a couple of cicada nymphs  molting and their wings expanding. One cicada starts molting then another climbs on top of it and also starts molting.

Posted by Edward at 8:47 AM No comments: 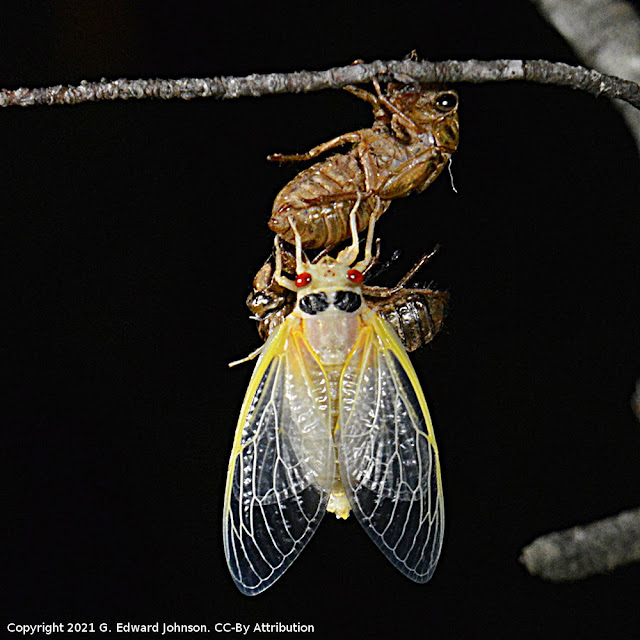 I took this photo of a newly molted cicada a couple of nights ago.  Last week they were only coming out some evenings, but this week it has been every night, and each night there are more and more of them.  They have only been emerging in the warmer areas, ground that is in shade for much of the day still hasn't released it's hordes. 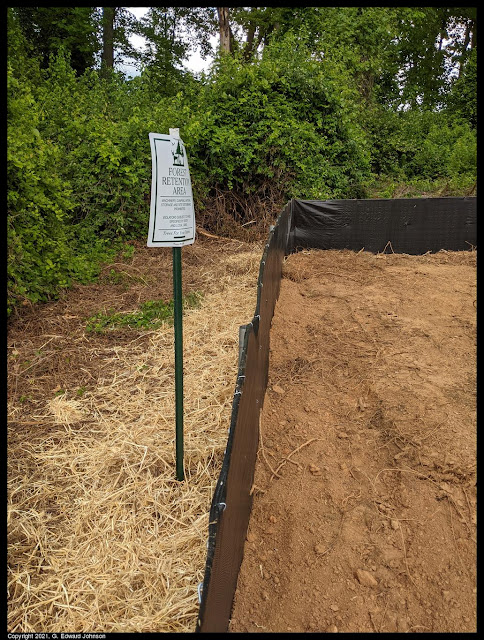 Just over a week ago they started doing work on the silt fence that will go around the Amalyn Bethesda construction site.  Now, they have installed the fence.  Interesting to me is that even though they used a giant saw to cut a narrow slit trench (that was plenty wide for the fence), they went over it again with a small excavator and widened it to about a foot an a half.  Then, they put in the erosion controling sediment/silt fence, put the dirt back, and have now put straw on the ground outside the fence.  This fence is supposed to keep any dirt that the rain washes away contained within the construction site. 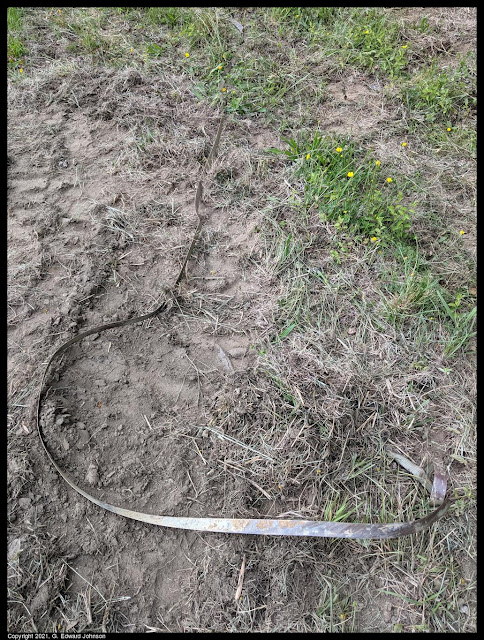 When the WMAL radio towers were here they were grounded with copper radiating out from each tower.  I believe these copper straps were what was used. They are buried several inches under the soil and go nearly to the edge of the property.  Many of them have been pulled out and in a couple of places parts of the straps are lying on the ground.

The cicadas have arrived in Bethesda! 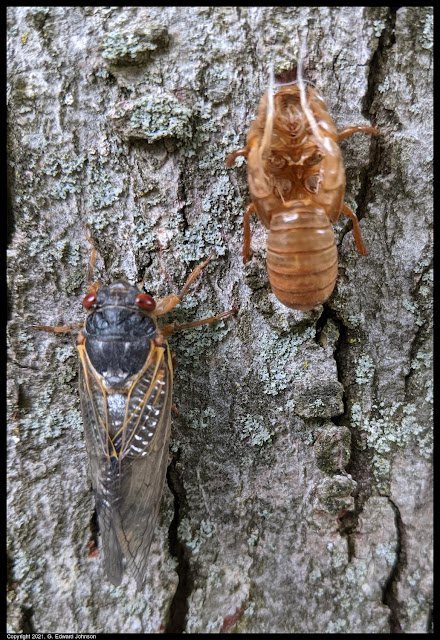 I was walking around Bethesda, MD this morning and noticed the first advance troops of cicadas on the trees.  They weren't everywhere, some trees would have a dozen or so, others just a couple, but most trees didn't have any yet.  That will change in the coming days. When they start coming out en-masse scenes such as this will be common.  Here you have a few cicadas still emerging from their exoskeleton and a couple who have just finished emerging but whose wings are still wrinkled up. 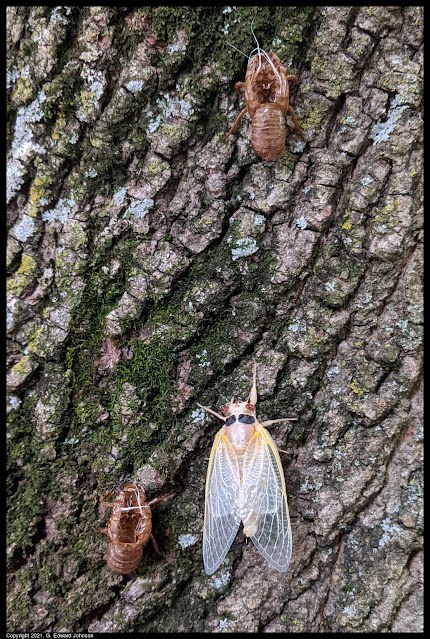 As they rest, their wings expand to full size. Notice they are very pale, it takes them a few hours to darken and for their bodies to harden. 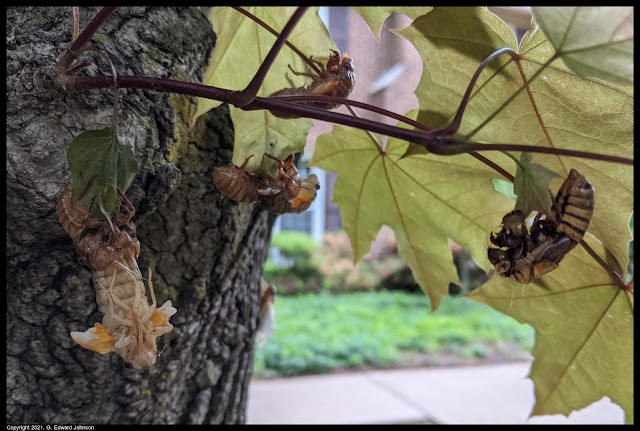 They don't limit themselves to just the tree trunks, they climb out onto the small branches and leaves.  They'll be everywhere. 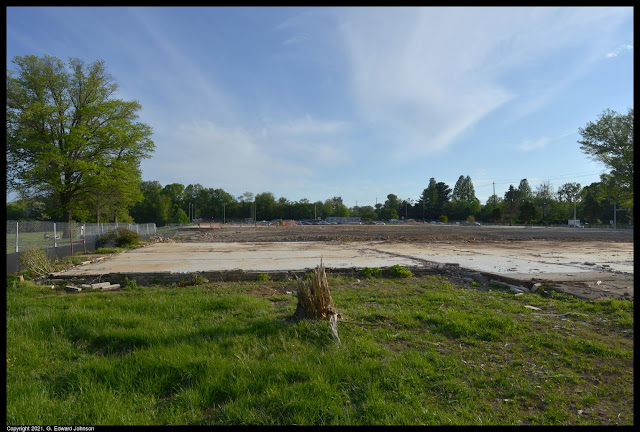 The demolition of Woodward High School / Tilden Middle School in North Bethesda (or Rockville if you want to call it that) is complete.  The building is entirely gone and all the debris cleared away.  The only evidence of its existence is the concrete slab the school was set on. 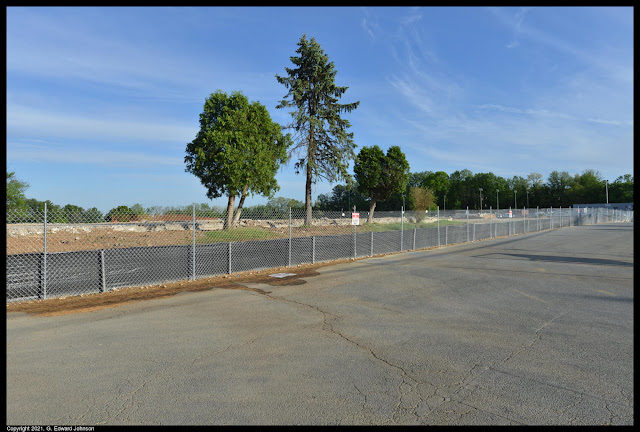 A few trees that were in front of the school remain, looking a bit lonely behind the construction fence.  If I were them, I would be nervous. 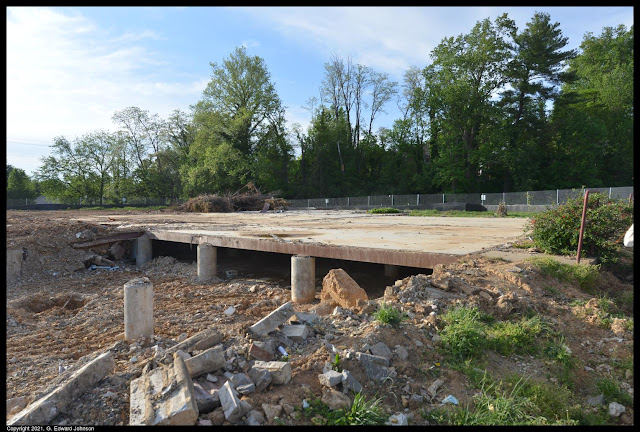 The slab itself is in the process of being removed. In a few places it was above the ground on short concrete pillars. Toll Brothers has started doing some site prep work for the Amalyn Bethesda housing development.  This development is located at the former WMAL radio broadcast tower location in Bethesda near the I-270 spur.  They are digging narrow  trenches around the perimeter of where it looks like work will be done. 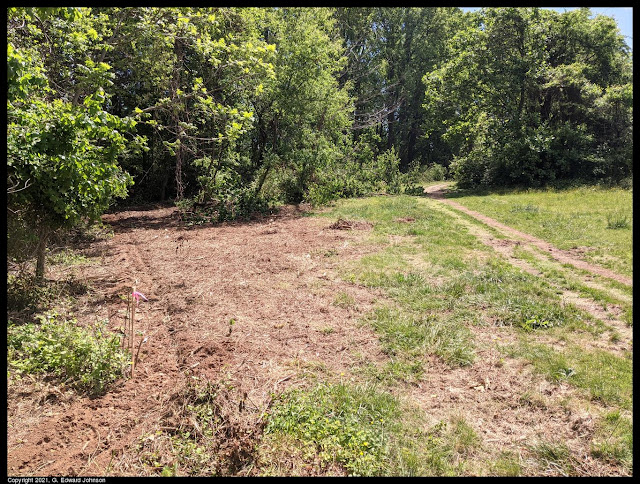 At recent construction projects (such as the demolition of Woodward High School) I have noticed that the fence around the project is set in a trench and has fabric at the base, this keeps any storm water runoff from filling streams with silt.  It looks to me like that is what is happening here.  Often times the fence is only about 18 inches tall, I hope that is the height they use here (and not a 6 foot tall fence which could totally block access)

Posted by Edward at 6:00 PM No comments: