You may have heard that Montgomery County, MD has fiscal problems this year. To cut costs, they decided to remove the portable toilets from the parks. This wasn't a popular decision so they came up with the idea of letting people or companies sponsor a park potty. 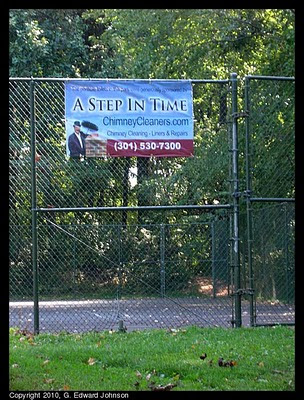 I was at one of the local parks over the weekend and I saw the result of this. Three banners advertising a local company, one on the tennis courts and two on the baseball diamond. At the top of the banner it said "The portable toilets in this park were generously sponsored by:" I really don't like advertising in the parks, on the other hand, the port-a-potties are a really nice thing to have. Hopefully in the future the county will be able to pay for them on its own, but this year at least it seems like an OK solution.
Posted by Edward at 11:29 AM