When I decided to go down to College Park, MD and see the unranked Maryland Terrapins play the 3rd ranked UNC Tar Heels I thought it would be a good game. I didn't think the Terps had much of a chance of winning.

The first half of the game did nothing to change my mind. The Heels got the first score and led for all but a minute or two.

The halftime show featured a local dance/twirl team who just happen to be champions. I think it was Wheaton Dance-Twirl but don't recall exactly and it doesn't look like they have updated their website in over a year.

The second half was much the same, with UNC slowly opening up the lead from 10 to 14, even 16 points ahead. Then something happened. Not sure exactly when, but UMD started tightning things up. When there were a couple of minutes left I suddenly realized that Maryland had a real chance. Then overtime, man that was close.

Overtime took for ever, lots of timeouts and a few fouls. I thought it would never end. When there were 5.9 seconds on the clock, with Maryland up, the seats were clearing out. All the college kids were moving down into the aisle so they could rush the floor when the game ended, I still wasn't convinced who would win. Fortunately, they weren't dissappointed, MD won 88 to 85. 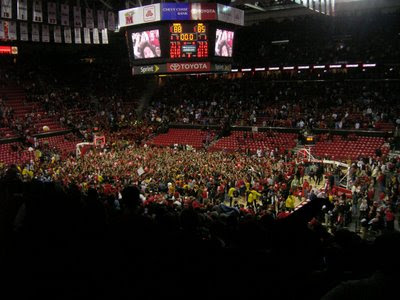 Shine silently has a post about this game with some good pictures, including one that was taken a fraction of a second before one of mine from a similar angle. What are the odds of that?
Posted by Edward at 9:50 AM