The beach is made for warm sunny days, not windy, rainy ones. So, what should you do on a rainy day at the beach? I went to Bonkersville. It is an indoor play place with some large inflatable play stuff. A really big inflatable doulbe slide, a maze with a big slide, another maze inflatable thing, and a moon bounce/slide. Yup, everything there included a slide. All that in a big room with a padded floor and a big open space for running. They also have a wooden train table and some areas set aside for parties.

We were the first ones there, about 15 minutes after the place opened. It wasn't crowded at all, but then, it was a school day. At first I was worried that there wouldn't be enough to do, but my kid had fun running and climbing, getting pretty tired after an hour. It made for an extra long nap that day, which is my criteria for success. Once you pay, your good for the whole day, so we left and came back late in the afternoon to burn off more energy. They also have free wifi, so I was able to surf the internet on my phone, which was a nice bonus.

It is reasonably priced and good for an hour or two of activity. I think it would be best for a small group of kids, like a play date. It also sounds like an excellent party idea. We almost went back the next day too, but the weather cleared so we were back at the beach.

The major downside is that they don't allow outside food and drinks, that kind of bugs me, since it is clearly not for a good reason except to enhance their revenue (You can't bring a bottle of water in, but you can buy one there).

I couldn't help but think of was it could be improved, and came up with a few suggestions, More comfortable chairs for the adults would be one, as would beanbag chairs. Another train table would be good, and if they also had the plastic trikes, they could charge for the under 2 crowd (currently free, but not much for them to do, the inflatable stuff is too big). A ball pit would be good too, but that would take up a lot of space. The air blowers where not obnoxiously loud, but you could always hear them, they never fully faded into the background, so muffling or moving them outside would be good. Don't take the suggestions to mean I didn't like the place, I would go back there again even with no changes.

Bonkersville is located in Lewes, DE, just up the road from Rehoboth Beach.

Crepes at the farmer's market 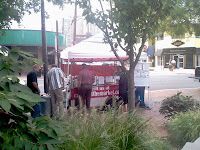 Today was such a nice day that I decided to walk around until I found a good place for lunch. This turned out to be good, because keep forgetting to go to the farmers market. They have a little stand that makes crepes, but I never walk by there on a Tuesday (until today).

The place that makes them is Crepes at the Market. It is a casual but well run cart. No need for a cashier, there are four wine glasses, for $1, $5, $10 and $20's, you make your own change. They were busy the whole time I was watching, the line was short but there were always at least a couple of people in it. 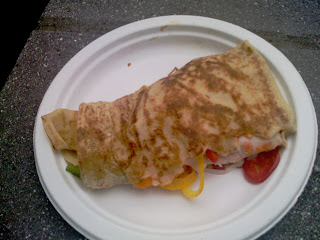 I had the Asiago, Turkey, Peppers, and Tomato crepe. The peppers were a colorful mix of red, yellow, and green peppers. The crepe was good, I ate it all pretty quickly. The turkey could have been spread out a bit more and I didn't get much from the Asiago cheese, next time I will try a cheese with a stronger flavor. If I remember, and if there is a nice day before the end of October, I will head back there again.


The farmers market is at Veteran's Park on the corner of Woodmont Ave and Norfolk Ave in Bethesda on Tuesdays and Saturdays from May through October. The park is supposed to have free wifi, but I was unable to connect to it, I'm not sure if it was their problem or if my phone was having trouble, I'll have to try again later.

[where: Woodmont Ave, Bethesda, MD]
Posted by Edward at 1:07 PM No comments: 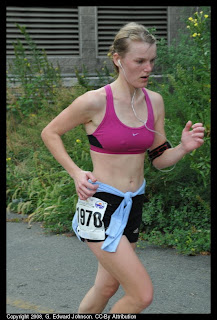 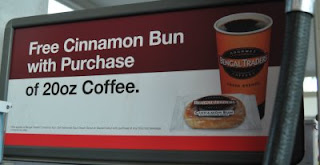 So often you see a great offer, but when you look at the fine print you find lots of restrictions. It happens so often that I was suprised to see the opposite happen. The big print gives you restrictions, the fine print takes some of those restrictions away. I have seen this brand of gas station run this promotion a couple of times.

In big print it says "Free Cinnamon Bun with Purchase of 20oz Coffee" The small print elaborates on that, letting you know that instead of a cinnamon bun you can also have a sour cream donut or glazed donut, and you don't have to buy a coffee, you can get any 20oz hot beverage. Kudos to Exxon for doing this.
Posted by Edward at 12:18 PM No comments:

Another good lunch at Quiznos

I have been going to Quiznos pretty frequently recently. It's a combination of convenience and the $5 large subs. The one I have been going to, is the one on Montgomery Lane, part of the Bethesda Place plaza complex. Twice now I have had really good customer service there. Today, I wanted lettuce and onions on my sub, but I somehow said tomato and onions. The guy making the sub asked to confirm that I didn't want lettuce (but of course, I did want lettuce, so he added it). A couple of weeks ago, I was looking through the glass to make sure I got what I wanted on my sub and the person at the cash register noticed and before taking my money asked if I had gotten what I wanted. It is fairly rare that people working at fast food restaurants pay much attention to the customer, and having it happen twice at the same place is worth mentioning.
Posted by Edward at 1:24 PM No comments: