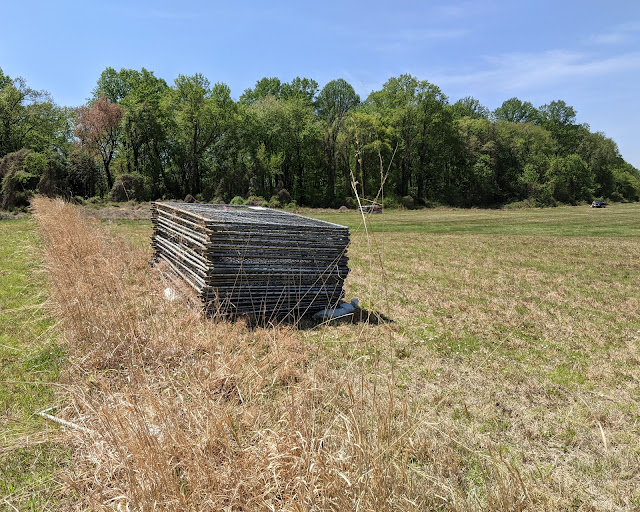 Due to the nice weather this week, we were able to harvest the fences a little early this year.  Here they are all stacked up and ready for market.
Posted by Edward at 8:01 PM No comments:

It seems like this crossing has been under construction for a long time without much progress being made recently. 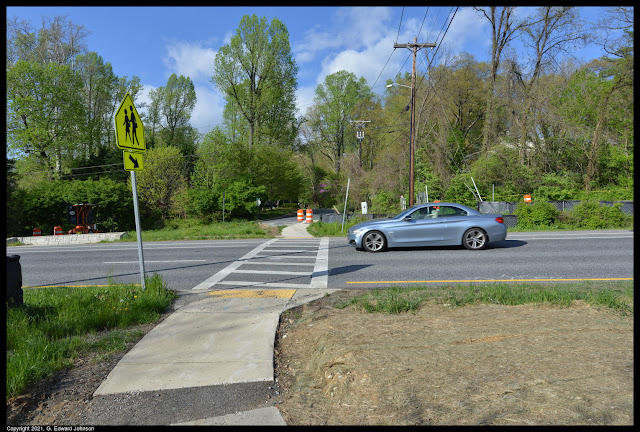 This is the crosswalk that is being replaced, it is on the Westbound side of River Road (Maryland Route 190) in Bethesda. There is no intersection or signal at this location. 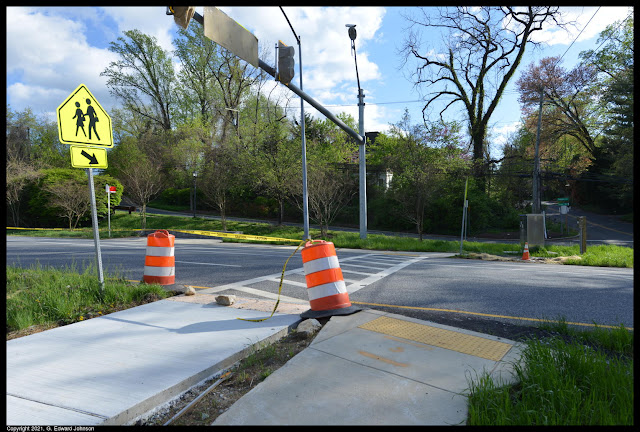 This crosswalk on the eastbound side of river road is not being replaced, however, you can see a traffic light is being added. 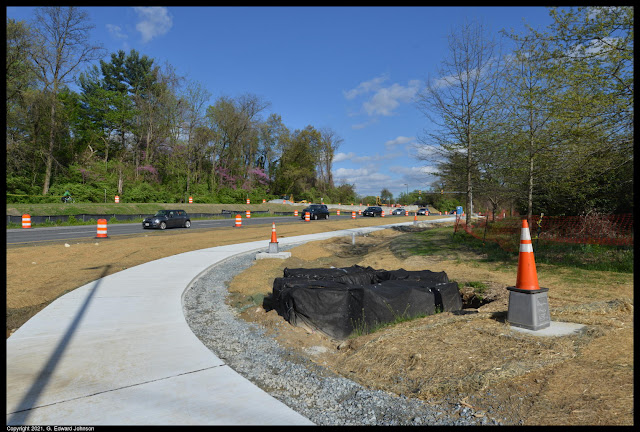 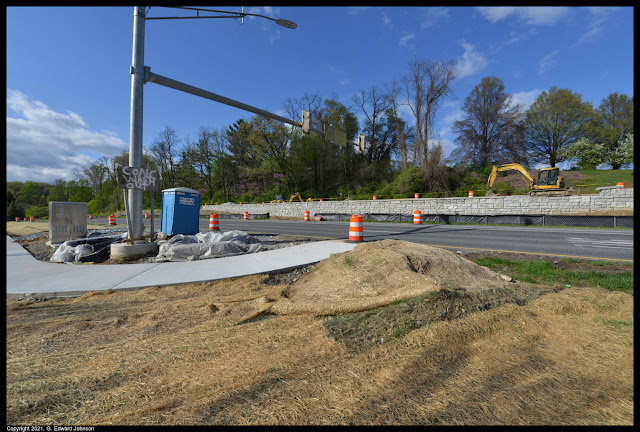 The new crosswalk across Westbound River Road is near the top of the hill, giving pedestrians better visibility.  There will also be a streetlight and a traffic light here. 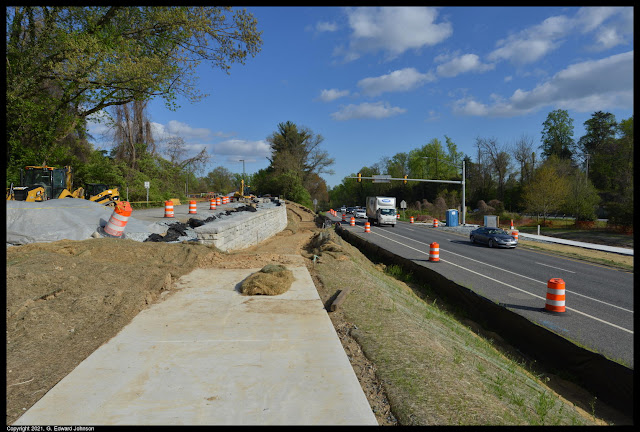 After crossing river road, you will be able to continue right towards Walt Whitman High School, or left towards the old crossing.

Posted by Edward at 8:45 AM No comments: 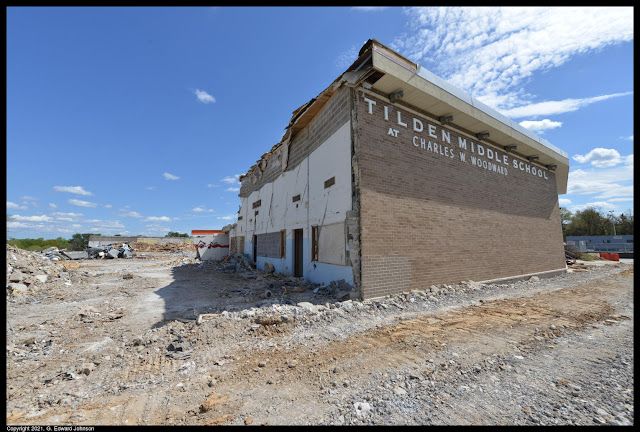 The demolition of Woodward High School / Tilden Middle School in North Bethesda is almost complete, only the front right part of the school with the school name and one rear wall remain. I am happy they left the wall with the name until the end. 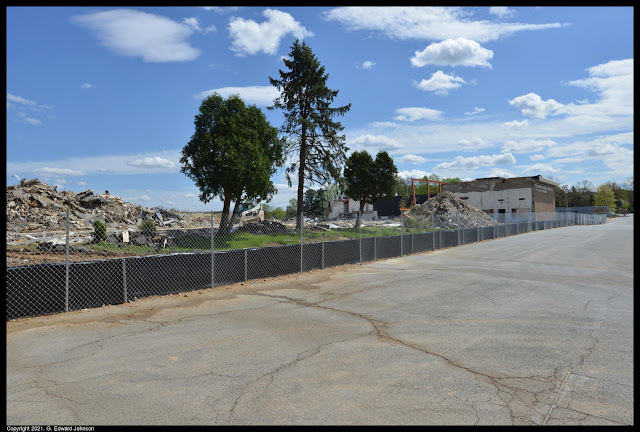 Here's a wider shot, the school used to cover the whole left side and more. The three trees you see still standing are directly across from the exit to Old Georgetown Road. 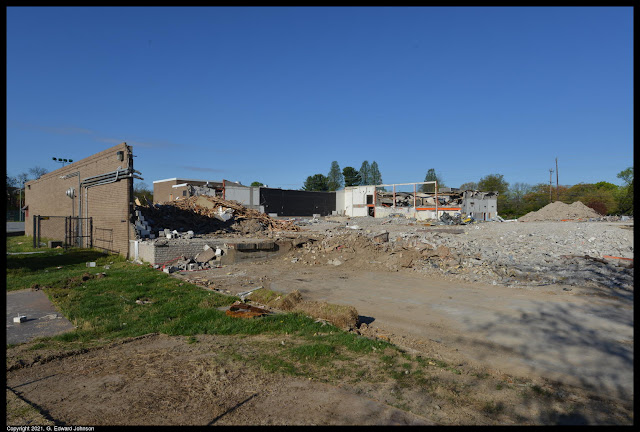 From the rear, you can see very little of the school remains, just part of the back wall and the front right corner are left.  Much of the rubble has also been cleared. Next to the back wall there is a pile of wood and to the right of the front wall is a pile of crushed cinder block. 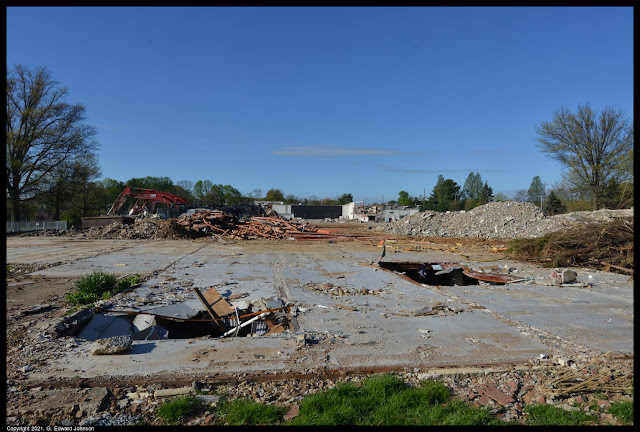 You often don't realize how big a building is until its gone.  This was taken from the side of the school, looking towards the remaining walls.  Towards the front is a pile of scrap metal.  Most of the metal and other rubble has already been removed.

The school opened in the late 1960's as Charles W. Woodward High School. Due to declining enrollment, the school was closed in the late 1980's. It later housed Tilden Middle school while that school was it was undergoing a major renovation.  Tilden moved out in the summer of 2020.

After the site is cleared, a new high school will be built here and will be used as a holding school for two years while Northwood High School is rebuilt.  In 2025 the school will reopen for students, probably as Woodward High School, however it may also be renamed as Josiah Hensen High School.

Posted by Edward at 8:01 AM No comments:

Improvements coming to the intersection of Fernwood Rd and Democracy Blvd

Later this year there will be major changes coming to the intersection of Fernwood Road and Democracy Boulevard in Bethesda, Maryland. This changes will be disruptive while they are occuring but will hopefully make the traffic exiting Fernwood onto Democracy flow more quickly. 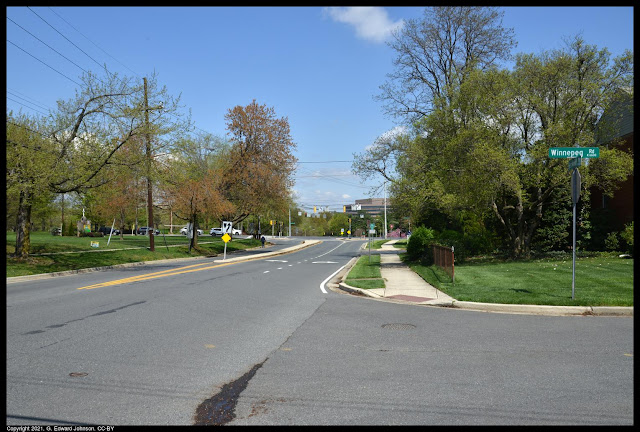 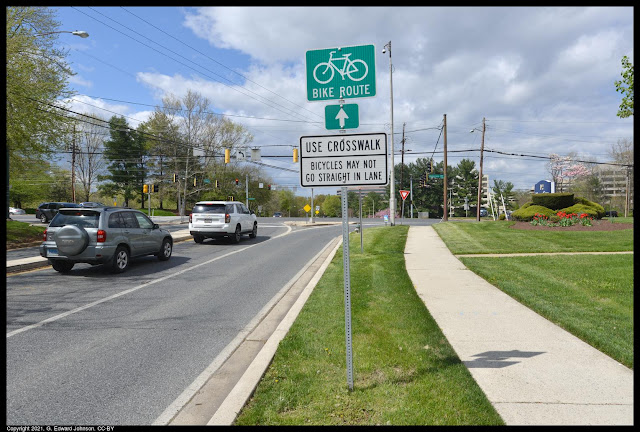 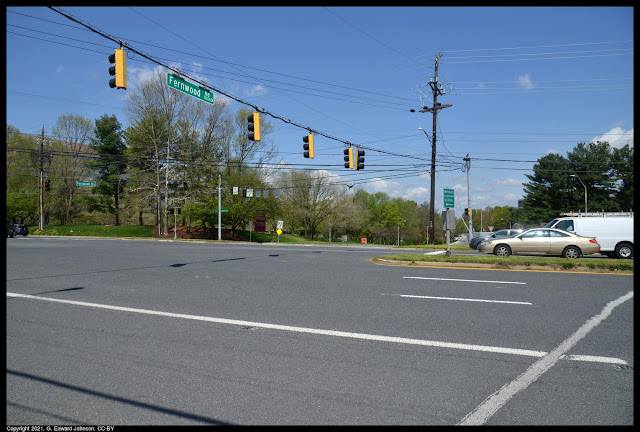 Part of the improvements will be adding a crosswalk across Democracy Boulevard here.  This will make it easier for bikes and pedestrians to cross and it will make it faster for drivers turning left since the won't have to wait for people in the crosswalk as often. 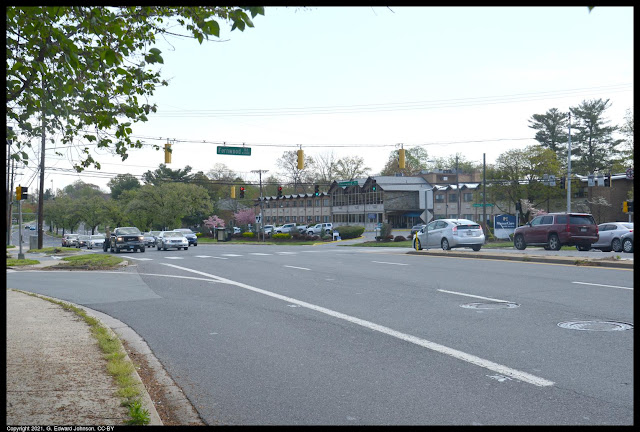 There will also be changes to the protected right turn slip lanes at the intersection. The concrete triangle will be made smaller and the radius of the turn will be reduced so it will be tighter at all four corners. I'm not exactly sure why this is being done, but I believe these high entry angle slip lanes are to reduce the risk of collision.
Posted by Edward at 9:15 AM 1 comment: 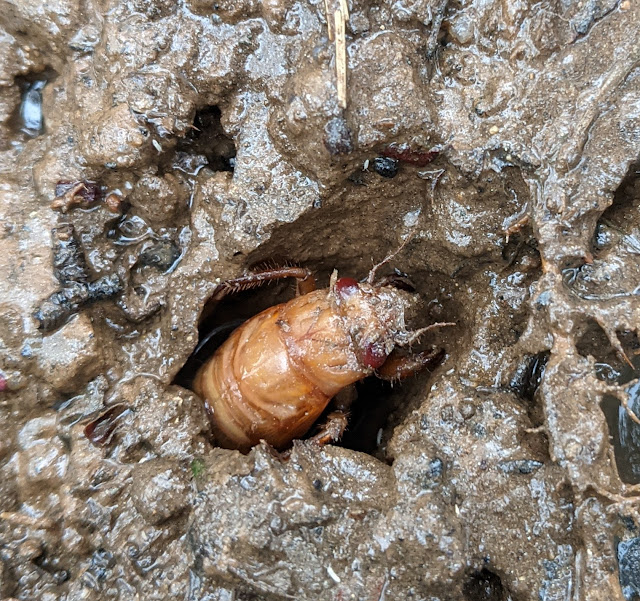 My favorite anachronistic insect is on its way.  The 17 year periodical cicadas should be out in force very soon.  Even as we speak, they are lurking just below the surface, biding their time.  For 17 years they have dwelt deep in the ground, feasting on sap from the roots of trees. Now, they are burrowing up to the surface, waiting for the time to be right. 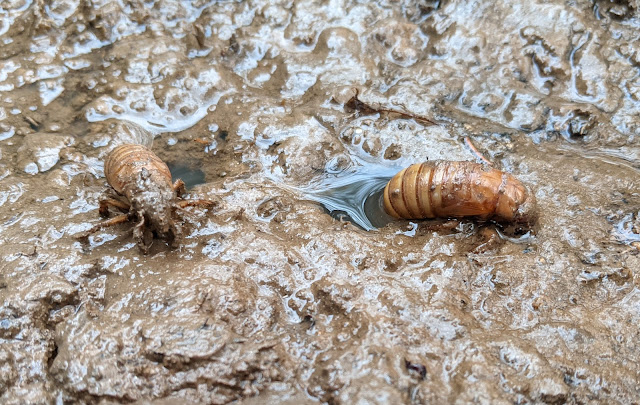 The rain yesterday evening flooded these poor creatures out. I took these photos just after it ended and I expect they will crawl back down into their burrows when it dries out.

I'm amazed these creatures can survive in a dynamic suburban environment like Bethesda.  The last time they were here was in 2004, think about how much has changed since then.  How many new or enlarged houses, how many widened roads, how many trees cut down and new trees planted.

Posted by Edward at 9:20 AM No comments: 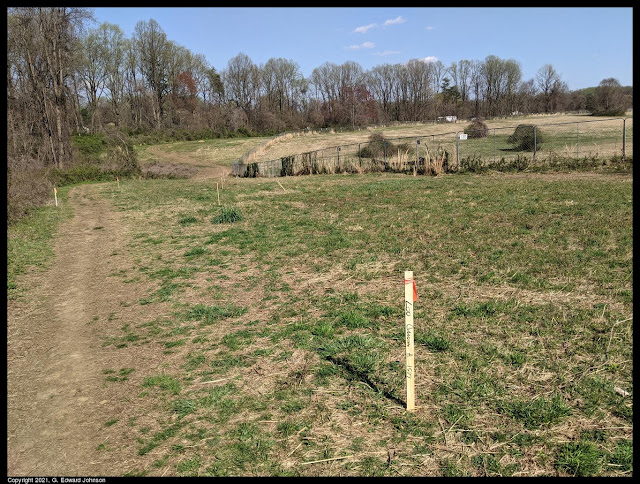 Toll Brothers is getting ready to start construction on their Amalyn project which will be over 300 single family houses and townhouses on the former WMAL radio tower field at 7115 Greentree Road in Bethesda, Maryland. This week they stakes sporting flags have been sprouting on the field as they prepare for the work.

They recently sent a letter to residents about the construction outlining the initial work. In it they state they will first be installing tree protection and sediment control features.

Workers will be accessing the property from the Greyswood Road entrance and the first thing they do will be to connect Greyswood and Greentree roads.  Greyswood Road currently dead-ends at a stand of trees, so those trees will have to be horrifically mangled and tragically destroyed cut down and removed. All work vehicles and equipment will be parked on the property and not on any of the streets surrounding it.  Construction should be limited to the hours of 7am to 5pm.

As part of the project, some improvements will be made to existing streets, primarily Greyswood Rd.  Greyswood will get some traffic claming devices and some more street trees. New sidewalks will be added along Greentree Road and Derbishire Lane along the proporties frontage. This work is expected to be completed by Fall of this year.

Posted by Edward at 7:56 AM No comments: