Where is the stock market headed? 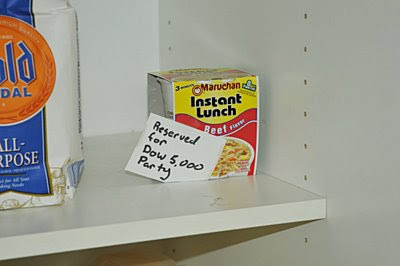 Looking at the DJIA chart I can see that the rate of growth picked up significantly around 1995. In fact, if the rate of growth had stayed the same as it was between 1985 and 1995, we would be around 7,500 now. If the rate of growth had stayed where it was before 1985 then we would be somewhere south of 5,000.
Is 7,500 what the Dow "Should" be at? I think that there are fundemental changes to the world economy. Outsourcing has hurt U.S. workers some, but helped U.S. corporations and Indian and Chinese workers. The market largely reflects what is happening to Companies, not people. U.S. companies are more global now too. These things should push the rate at which the stock market increases up a bit. On the other hand, markets tend to go from overly optimistic to overly pessimistic, so they could well go below 7,500 before coming back.

The Dow is a pretty poor index to track, the S & P 500 is much better, extrapolating the growth rate from '85 to '95 out to today would give us right around 800, about 20% below where it is now. There are other things to consider.

Take a look at the average price to earnings (PE) ratio of the S&P 500, it has fluctuated from below 10 in bear markets to around 20. After 1995 it goes up and peaks above 45. The historic norm is 15 (but the period of 1995 to 2000 pulls up the norm a bit, I think the norm was around 12 pre '95). Figuring out the P/E is a bit tricky, but you can get close by looking at the PE of "S&P Depository Receipts" Ticker symbol SPY. That shows a PE of around 13. Of course, if earnings (the 'E' in P/E) deteriorate, that could push the P/E higher even if prices go down. If we are headed to a P/E below ten like serious bear markets in the past, we still have a ways to go by this measure, but it looks reasonably valued at this point.

Another way of looking at the value of the market is by looking at the dividend yield. For a long time, the yield has been going down and is quite low. Way back in 2002, when the Dow was at 8,500, Bill Gross, the manager of the worlds biggest bond mutal fund said the dividend yield of large market indexes need to be 3.5% for the index to be fairly valued. Getting there would result in the Dow going down to 5,000. (or companies increasing their dividends). The S&P is currently yielding 2.18%, so by that measure it still looks overvalued, even 8 years after the article was originally written.

To me, it looks like the market could go down a bit more, but then again, maybe it will go down alot, or maybe it will start going up. Dow 7500 is possible, Dow 5000 seems like unlikely, but I can't rule it out. Looking back in time only tells you past trends, it is myoptic to only consider these. Who knows what will happen next.

Email ThisBlogThis!Share to TwitterShare to FacebookShare to Pinterest
Labels: interesting, The Future, writing