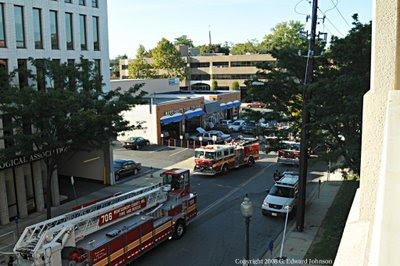 I was driving on Old Georgetown Road on Tuesday and noticed that Del Ray Avenue was closed and there were lots of fire trucks. I took a look around and it seemed like the activity was around 4930 Del Ray Ave. home of the American Gastroenterological Association. (If we were playing scrabble, that would be worth a lot of points). It didn't look like there was a fire, no smoke or hoses, but I counted 9 fire trucks, two rescue squads, one ambulance, a couple of police cars and a couple of other fire-related equipment.

A bit of digging on the BCCRS web site suggests it was a Box alarm for a building of higher than 7 stories. This should bring out five engines, three trucks, one rescue squad, one ambulance, two duty officers. That is pretty close to what I saw. I had to look around the Bethesda Fire Dept website for the definition of a box alarm. As best I can tell, it just means they got an alarm call and this is the pre-planned set of equipment they send to the scene before they know if it is really a fire or not.

If you know anything more, post it in the comments. 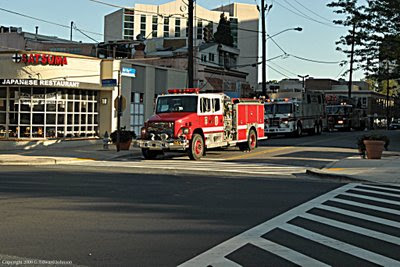